The legacy of 9/11 is twin-fold! The recent one represented by the US and Islamic terror is one of violence and ‘clash of civilisation’, while the older 9/11 consolidates the message of universal brotherhood and harmony

September  11, 2001, is a tragic date for the history of the world, particularly for the United States. It indicates the brutal terrorist attack on New York City that killed thousands of innocent people. It began the War on Terrorism that today in 2018 continues unabated.

The threat of Islamist terrorist attacks has continued from the Taliban, Al-Qaida and ISIS to numerous smaller groups. Terrorist strikes have occurred on every continent. India has not escaped these either having endured several terrorist assaults like  26/11, 2008.

The 9/11 attack resulted in wars in Afghanistan, Iraq, Libya, Yemen and Syria. In these and related civil conflicts hundreds of thousands have been killed. One could call the War on Terrorism the world war of the twenty-first century. Associated violence and instability in various Islamic countries have brought waves of immigrants and refugees into Europe, which may permanently change the demography and identity of Europe itself.

The overall war on terrorism has made some gains, particularly the recent defeat of ISIS in Syria, but has not come to an end. It threatens to cause greater conflicts with the US and its allies against Russia, Iran and perhaps other countries.

Osama Bin Laden, the mastermind of the 9/11 attacks, was eventually captured and killed by the Americans at a military base in Pakistan in 2011. Though the majority of 9/11 terrorists came from Saudi Arabia and had connections with Pakistan, little has been done to penalise either country for their involvement.

The September 11, 1893 speech of Swami Vivekananda in Chicago was a different event, transformative in the opposite direction. Hindus announced their presence in the modern world through Swami Vivekananda, not with a war cry or a terrorist attack but with a call for world peace, respect between religions and an honouring of Yoga and Vedanta along with all the spiritual paths of humanity. Whereas the 9/11 terrorist attack was a call to violence and hatred, Swami Vivekananda’s call was to end intolerance and exploitation, such as India was suffering from under British colonial rule. 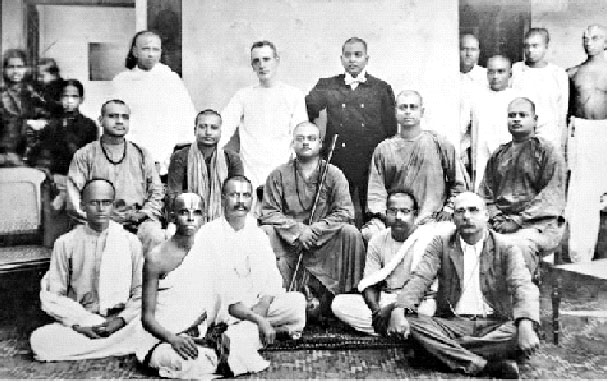 Swami Vivekananda with fellow saints and people who visited him at Vivekanandar Ilam at Triplicane, Chennai, on the shore of the Marina

Yoga has since become a worldwide movement offering wellbeing to millions of people. Along with Yoga came the profound teachings of Vedanta, new views of cosmology, higher states of consciousness and new healing methods for body and mind, with non-violence as the best approach for addressing our social conflicts.

Bharat became independent in 1947 after a long freedom movement, and today is the world’s largest democracy and fastest growing economy. Hindu Gurus travel all over the world teaching numerous groups from all backgrounds. A new Hindu diaspora has spread to North America, UK, Australia, New Zealand and elsewhere, building magnificent temples, and becoming among the most affluent and best-educated minorities in their countries of immigration.

Hindus have not created any terrorist movements or attacks, nor do they constitute any law and order problem in their newly adopted countries. And we must remember that India suffered more under colonial rule than the Middle East did. Hindus did not seek revenge but rather sought to create a deeper understanding and broader acceptance between people and cultures.

From Terrorism to Yogic Spirituality

How does the world move forward today in this era of division and violence? The deeper spiritual legacy of the planet as expressed through Swami Vivekananda and Hindu Dharma is one of integration with the whole of life. The current political and military legacy of the planet is one of a complicated war on terrorism mixed with the strife born of human greed and competing beliefs.

While everyone in the West knows of 9/11 for its terrorist attack, few know 9/11 as the date of Swami Vivekananda’s profound message of human unity and universal consciousness.

Such terrorist attacks are rooted in a religious exclusivism and intolerance in the minds of those who perpetrate them. If we introduce pluralism into spirituality, such as is the Hindu view, recognising that there are many paths to the Divine or higher Self, and the freedom to pursue whatever path we prefer, we can cut off the roots of this terrible violence.

For this to succeed humanity must give up both its materialistic fixations and its religious aggression, once more honouring all life as sacred, not to be interfered with, exploited or harmed.

Will a new sense of human unity arise? It is crucial if we are to survive as a species. Swami Vivekananda led the way on this higher path that we need to follow  with conviction.

Osama Bin Laden had his different path ending in the destruction that must be completely rejected. The causes behind these conflicts must also be addressed. It requires that all the countries of the world follow the way of dharma, understanding the unity and interdependence of all humanity and all of nature. It is a daunting  challenge but certainly much more preferable than  the alternative.

The findings of an international study led by Hamilton researchers suggest that combination therapy of aspirin, statins and at least two blood pressure medications given in fixed doses can slash the risk of fatal cardiovascular disease (CVD) by more than half. The study was published by the journal The Lancet and concurrently presented at the European Society of Cardiology Congress by Joseph. The fixed-dose combination (FDC) therapies were examined both with and without aspirin versus cont ...