Over the past few years, Europe has found itself in the frontline in the fight against terrorism and jihadist radicalisation. They have become some of the most serious threats to European security, and to the values, the European Union was built on.

The terrorist attacks in Europe over the last few years, many of which were perpetrated by European citizens, highlight the persistent threat of homegrown radicalisation, which is defined by the European Commission as the phenomenon of people embracing opinions, views and ideas, which could lead to acts of terrorism.

Ideology is an intrinsic part of the radicalisation process, with religious fundamentalism often at its heart. 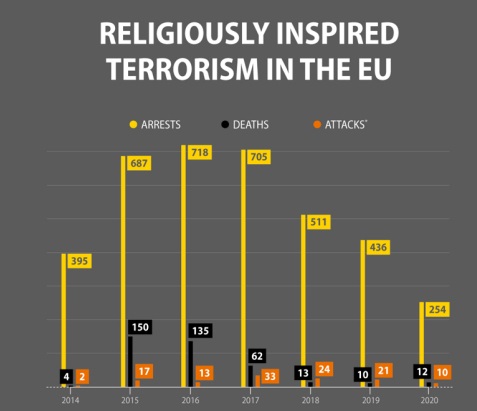 According to the 2021 Europol report on the Terrorism situation in the EU, there were 57 terrorist attempts in the EU in 2020 (that includes successful, failed and foiled attempts), compared to 55 in 2019. Of those, 10 were jihadist terrorist attacks in Austria, France and Germany.

Page 2 Although they represent only a sixth of all attacks in the EU, jihadi terrorists were responsible for more than half of the deaths (12) and nearly all injuries (47). The total number of fatalities and injuries in the EU doubled from 10 deaths and 27 injuries in 2019 to 21 deaths and 54 injuries in 2020.

A total of 14 ethno-nationalist and separatist terrorist attacks took place in France and Spain, while 24 attacks were carried out by left-wing or anarchist terrorist organisations or individuals, all in Italy. In most cases, these attacks targeted private and public property such as financial institutions and government buildings.

In 2020 the number of completed jihadist terrorist attacks was more than double that of foiled plots. 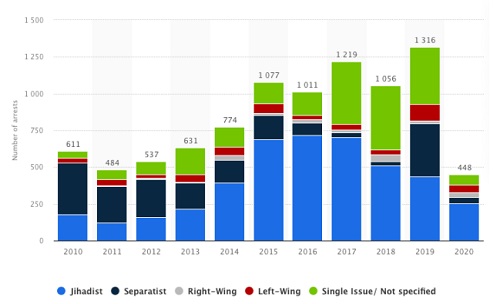 Number of suspects arrested for terrorism offences in the European Union (EU) from 2010 to 2020, by affiliation

One is a higher fertility rate of Muslim population than other Europeans and other is the large influx of Muslims into European countries that arose out of a refugee crisis which reached a peak in 2015.

Secondly, a large number of refugees especially from Muslim countries may be fearing persecution or by a well-thought-out strategy, began to abandon their Islamic lands, sailed to Europe by crossing the Mediterranean Sea to influence a demographic change.

The Muslim population in Germany has risen to around 5.5 million and now represents some 6.5% of the total national population.

Fatally Stabbed to Death Conservative lawmaker Sir David Amess, 69 years old. He was long-serving member of Parliament was stabbed to death on 15th October, 2021. He was attacked at a Methodist church in Leigh-on-Sea, a town about 40 miles (62 kilometers) east of London. A 25-year-old man was arrested in connection with the attack.

He is the second serving MP to be killed in recent years, following the murder of Labour MP Jo Cox in July 2016.

Colleagues from across parliament expressed their shock and sorrow and paid tribute to Amess.

UK Prime Minister Boris Johnson said he and his cabinet were “deeply shocked and heart-stricken”.

The police identified the suspect in the grisly assault in the town of Kongsberg, about 50 miles southwest of Oslo, as Espen Andersen Braathen. He is a 37-year-old Danish citizen and was arrested on the night of 13th October, 2021, 30 minutes after he began his deadly rampage targeting random people, in what the authorities said was an apparent act of terrorism.

Four women and a man between the ages of 50 and 70 were killed, and three other people were wounded. The suspect has been described by police as a Muslim convert.

Online communication has made cross-border communication easier for terrorists and has amplified terrorist propaganda and the spread of extremism. EU countries are working together to stop terrorists from using the internet to radicalise, recruit, incite to violence and facilitate the carrying out terrorist attacks. On 16 March 2021, the Council adopted a regulation on addressing the dissemination of terrorist content online.

The rules will apply to all providers offering services in the EU, whether or not they have their main establishment in one of the the member states.

The legislation also provides for a clear scope and a uniform definition of terrorist content in order to fully respect fundamental rights. It also includes effective remedies both for users whose content has been removed and for service providers to submit a complaint.

To closed the legal loopholes which allowed terrorists to use reconverted weapons, the Council adopted in 2017 new rules on control of the acquisition and possession of weapons.

In June 2019, the Council adopted new rules to limit the availability of explosive precursors to the general public and ensure the appropriate reporting of suspicious transactions throughout the supply chain.

Explosive precursors are chemical substances that can be used for legitimate purposes, but can also be misused for the illicit manufacture of homemade explosives.

The authorities are becoming increasingly reliant on e-evidence to track down and convict criminals. The EU is currently working on new rules to ensure a more efficient mechanism for cross-border access to e-evidence.

The legislative proposals under discussion aim to allow member states' competent authorities to request e-evidence directly from service providers active within the EU, irrespective of their place of establishment and data location.

In March 2017, the Council adopted a directive on combating terrorism. The new rules strengthen the EU's legal framework to prevent terrorist attacks and address the phenomenon of foreign terrorist fighters. The directive criminalises acts such as:

• undertaking training or travelling for terrorist purposes
• organising or facilitating such travel
• providing or collecting fund related to terrorist groups or activities.

Cutting the financing of terrorism

Risks of money laundering and the financing of terrorism are a major concern for the EU's financial system and the security of its citizens.

Since 2018, the EU has stronger anti-money laundering rules in place. These rules make it difficult to hide illegal funds under layers of fictitious companies, and strengthen checks on risky third countries. They also reinforce the role of financial supervision authorities, and improve access to and exchange of information.

The Radicalisation Awareness Network is a network of frontline practitioners from across Europe, such as teachers, police officers and prison authorities, who work with people who have been or are vulnerable to radicalisation.

Europol’s Internet Referral Unit, scans the web for online terrorist material and refers it to host platforms. Since its creation in 2015, it has referred more than 130,000 pieces of content to internet companies (over 25,000 in 2019).

The law named Reinforcing Republican Principles has been passed in the lower house of France and is also being called anti-Separatism Law. It is designed mainly to counter a rise in Islamism in towns and cities which the government says threatens national unity. The legislation did not single out any particular religion, but it cracked down on practices such as forced marriage and virginity tests.

It included tough measures against online apologists for acts of violence, stricter surveillance of religious associations, and tighter restrictions on educating children outside mainstream schools