The violent attacks by the Muslims against Hindus started on October 13 when a mob attacked many pooja pandals during Navaratri.

An angry mob attacked a Hindu temple in Comilla after a photo showing the Quran placed on the knee of a Hindu deity went viral on social media during the Hindu holy festival of Durga Puja is beloved to be a trigger that led to the commencement of a series of atrocities on the Hindu minorities across the country.

A timeline to understand the various incidents that took place in Bangladesh is as follows: 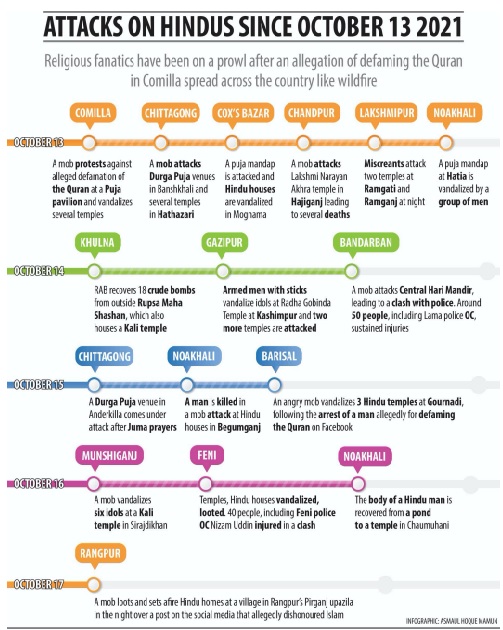 India is in touch with Bangladesh over attacks on Durga puja pandals allegedly carried out by the radical group Jamaat-e-Islami. Four people, including an Imam, were arrested in Bangladesh's Kishoreganj district in association with the vandalisation and looting of a Hindu temple. The violent incident took place on October 15, 2021, at the Kali Mandir in the Kadim Maijhati area. The miscreants entered the temple, vandalised five idols and fled.

On October 18, hundreds gathered peacefully to call for an end to the violence. The authorities have reportedly filed at least 71 cases in connection with the violence and arrested 450 people. Prime Minister Sheikh Hasina Wazed has promised strong action, declaring, "Nobody will be spared. It doesn't matter which religion they belong to."

Vishva Hindu Parishad (VHP) held an agitation at Rani Rashmoni Road in Central Kolkata and demanded immediate help to the Hindus suffering in Bangladesh. VHP's Central Joint General Secretary, Surendra Jain, said that the alleged atrocities being by the radical Islamic Jihadists and fundamentalists on Hindus could only be compared with the brutality of the Nazis.

Bangladesh shut down mobile internet and deployed paramilitary forces to over 35 districts to stem the violence. Four people died when police reportedly opened fire to contain a mob, and at least three more people have died amid the clashes; more than 100 are reported injured.

Bangladesh Prime Minister Hasina alleged and called on Narendra Modi's government to quell communal violence in India, where the ruling party has fueled violence targeting the minority Muslim community. "They (India) have to be aware that such incidents should not take place there, which would have an impact on Bangladesh, and the Hindus in our country face attacks," she said.

On October 19, 2021, Bangladesh PM Sheikh Hasina instructed her home minister to initiate immediate strict action against those who incited violence using religion as she asked the people not to trust anything on social media without fact-checking.

The foreign ministry said in a statement that domestic elements that opposed Bangladesh's independence from Pakistan 50 years ago were still propagating their "toxic narratives to instigate violence, hatred and bigotry".

The worldwide International Society for Krishna Consciousness (ISKCON) called upon Prime Minister Sheikh Hasina's government to take swift action to end the violence and demanded that perpetrators of the attacks should be brought to justice. After ISKCON temple authorities reached out to United Nations urging it to speak against the violent attacks on Hindu temples and devotees in Bangladesh, the organisation's Bangladesh coordinator Mia Seppo demanded protection of minorities and an impartial probe in the matter.

Condemning the reports of attacks on the minority Hindu community in Bangladesh, the United States on October 18 said that freedom of religion or belief is a human right. Amnesty International also expressed concerns about the attacks.

The recent outbreak of violence adds to Bangladesh's long history of communal violence against minorities. According to a human rights organisation, Ain o Salish Kendra (ASK), at least 3,710 attacks against the Hindu community have been registered between January 2013 and September 2021.

There have been several instances where Muslims can be seen offering prayers on roads, stations, parks and other public places if there is no mosque available and has become a contentious issue in India and throughout the world between Muslims vs Non-Muslims.   There has been a row over Muslims offering Friday namaz at public places identified by the administration for over a month. Locals and right-wing groups have objected to it because these permissions were given without the ...