Book Review: A Ringside View of Master of Compassion

All those interested in the 14th Dalai Lama can now get a glimpse into his extraordinary life and works. Tenzin Geyche Tethong, who has had a close  association with the present Dalai Lama, has presented His Holiness in a holistic manner

Although there are innumerable books, written about as well as by the 14th Dalai Lama, the thirst for new and good books about him appears to be insatiable. “His Holiness The Fourteenth Dalai Lama – An Illustrated  Biography” by Tenzin Geyche Tethong is the latest addition to this vast collection. Having personally watched the Tibetan scene from a close distance for almost half a century, it won’t be an overstatement if I welcome this new book with the question, “Why was such a book not published earlier?” And my own answer to this question would be that no such book could be published earlier because there is no one else other than Tenzin Geyche Tethong who has had such a close, long and  minute-to-minute association with the present Dalai Lama. 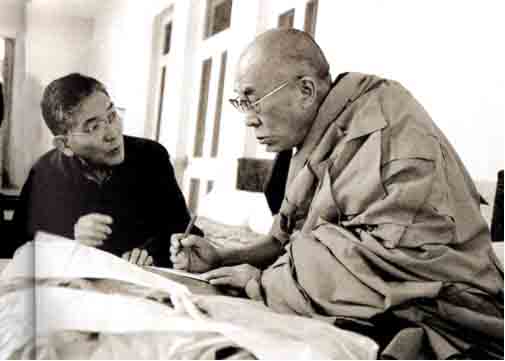 Tenzin Geyche served the Dalai Lama formally for 44 years viz. from 1963 to 2007 as a member of his personal staff. This includes his 30 years as the Private Secretary to the Nobel Peace laureate. However, despite his formal retirement, his close association with the ‘Private Office’, as the office of Dalai Lama is popularly called, has continued till this day with various informal responsibilities.

In addition to being a first-hand witness to the day-to-day, rather minute-to-minute developments around Dalai Lama all these years, his position gave him the privilege of traveling with him and accompanying him in his meetings with some of the greatest and most powerful personalities of our times. As the Private Secretary and interpreter of the Dalai Lama he has been the first hand witness to his meetings with three Popes, three US Presidents and numerous heads of states, diplomats, scientists, artists, followers and even dissenters. No wonder this book  presents such an intimate ring side view of developments which only a person like Tenzin Geyche could have done.

Modern Tibet And the Dalai Lamas

Out of the main five chapters of the last four are focused on the present Dalai Lama. The opening chapter, titled “The Bodhisattva of Compassion” starts with an introduction of the great Tibetan king Songtsen Gampo (born in 605 AD) who was the 33rd king of Tibet’s Yarlung dynasty and is known for establishing Tibet as a nation. In order to give the reader a background to present the Dalai Lama’s life and works, Geyche gives a comprehensive introduction to the 13th Dalai Lama who  symbolises present and modern day Tibet as known to the world since the end  of the 19th century.

This book is spread over five main chapters besides a two-page friendly foreword by Tendzin Choegyal, and an 11-page preface by the author. Choegyal, the younger brother of the Dalai Lama, is a close and long term friend of Geyche, and has been actively interacting with the author all along four years when work on the book was in progress. Actually it was on Choegyal’s advice that the publishers zeroed in on Geyche to commission the book. In his foreword Choegyal writes, “I have supported this book project from the day of its inception because the story of His Holiness is important for all humanity. And who better to tell it than my old friend and a dedicated member of the Tibetan establishment, Tenzin Gyche Tethong.”

Tenzin Geyche has been quite methodical in selecting the most relevant and interesting events and issues to present the personality of the present Dalai Lama in a holistic manner.  It must be a difficult job to present all facets of a popular and active person like the Dalai Lama in a single book who travelled extensively, interacted with some of the most important personalities of the world and even today remains at the top of the list of most popular and liked persons of our times. Details about his escape story, rehabilitation of the Tibetan refugees, his impressive reach out to the world and the numerous honours he received from across the world make the reading interesting.

As a journalist who has spent almost five decades in understanding  political developments around Tibet and its people, I find one specific piece of information in this book which is bound to work like a time bomb in the Asian politics, especially relations between India, China and Russia. Although we have been hearing some murmurs and vague talks about a period when Indian government looked inclined towards making a dramatic change in its Tibet policy, the issue was always hushed up and pushed under the carpet by an over cautious Indian bureaucracy during past decades. This book for the first time talks openly and specifically of Prime Minister Lal Bahadur Shastri’s government having made up its mind to recognise the Dalai Lama’s ‘government in exile’ of Tibet as the ‘Government of Tibet.’

Referring to an official message from W.D. Shakabpa, Dalai Lama’s representative in New Delhi, under a specially boxed section titled “Lal Bahadur Shastri: A True Ally”, Tenzing Geyche writes “the Indian government was prepared to recognise the Tibetan government in exile and that he would receive a definite answer once the Prime Minister (Lal Bahadur Shastri) returned from Tashkent. Unfortunately Shastri died suddenly (and according to some reports, mysteriously) in Tashkent on 11 January 1966. Once again, the matter of Tibet and its independence became a casualty.” This is the first time that this issue has been mentioned in no unambiguous terms in a book written by a high ranking and closest associate of the Dalai Lama who was first hand witness to the most significant and sensitive development on Tibet.

An added strength of this 352-page beautiful and richly laid out book is a wide range of rarely available photos of the present Dalai Lama and life around him. A good number of photos, unpublished so far, among this treasure of about 400 photos are rare as they have been taken from personal albums of Dalai Lama’s family members and various institutions and individuals. Hence a good part of the credit for making this book beautiful, special and a prized possession goes to Jane Moore who is the photo-editor of the book and an old friend of Tibet. In addition to editing the photos with professional perfection, she also used her charm and the art of persuasion to make this collection in a single volume possible. In most cases the quality of reproduction of these photos is nearly as good as original photo prints.

But in addition to detailed information about the 14th Dalai Lama, this book is going to stay as an outstanding source book for collectors who have keen interest in the visual history of Tibet and the life journey of the 14th Dalai Lama. The quality and historic value of many photos deserve mention. For example the photo of Agvan Dorjiev, a senior monk of Buryat-Mongol origin at St. Petersburg in 1898 (p-44);  a Tibetan crowd at Jokhang in Lhasa in 1904 watching the arrival of British forces (P-41); photo portraits of 13th DL in 1910 (p-36 and 50); his last photos during 1933 (p-62 and 63); group photo of Sir Henry McMahon, Sir Charles Bell along with the Chinese and Tibetan delegation member during Shimla Convention in 1913 (p-55);  the 1916 photo of the first parade of Tibetan soldiers with newly designed national flag (p-59); and the very first photos of 4 year old 14th Dalai Lama and his family members (p-66, 70, 71) along with the American photographer Archibald Steele are of outstanding historic value. The last set of photos by Steele who was an American journalist stationed in China. He traveled especially to Kumbum in Tibet to meet the baby Dalai Lama in 1939; this shows his professional spirit. The reproduction quality and photo editing deserve appreciation for bringing photographs of over a  century old era to life. To say in short, this book is bound to become a collectors’ item for all those who are interested in Tibet, Dalai Lama, Buddhism, China, photography and the power of human spirit. A rare ringside view of the personality of the greatest ringmaster of compassion in our troubled world.

Beyond Rampage: An Autopsy of 1921 and Malabar

G Sreedathan With unassailable proofs, author B S Harishankar tears apart the theory promoted by Left historians and Islamists that 1921 Khilafat rebellion in Malabar was not spearheaded by poor peasants but wealthy Muslim timber traders   Historians observed that Muslims in the sixteenth century Malabar, who then compromised a minority of the population, enjoyed many commercial, political and religious privileges. It was also contemplated by Mahmood Kooria that, “all the mer ...