Attacks on Bangladeshi Hindus: Blasphemy is an Excuse, Ethnic Cleansing is the Aim

Islamists mounted a series of attacks on Hindu temples across Bangladesh amid Navaratri festivities. A string of attacks on temples and Durga Puja pandals occurred in Comilla district and elsewhere following “rumours” spread through social media, according to media reports.

The Bangladesh Government has deployed paramilitary forces and is asking authorities to act against the perpetrators. A temple in Comilla became the flashpoint on Tuesday night for allegedly disrespecting the Quran.

Meanwhile, taking a note of the recent incident of attack on minority Hindus in Bangladesh, West Bengal Leader of Opposition Suvendu Adhikari urged PM Narendra Modi and  Home Ministers Amit Shah to take up “this painful and shameful issue with the Bangladeshi authorities diplomatically, and support the Sanatani Bengalis in this times of distress.”

According to reports, Bangladesh Nationalist Party(BNP) and Jamaat-e-Islami goons planted a copy of the Quran at the feet of Ganesh in the Durga pantheon at Nanuyar Dighir Par Temple on October 12 night. “The miscreants took some pictures of this and ran away. Within a few hours, using Facebook, the propaganda spread like wildfire with the provocative pictures,” said a district official. Angry mobs vandalised puja pandals, and the temple.

According to reports, 43 Jamaat-e-Islami goons were arrested. The chief of Chittagong Range said the perpetrators of the attacks on Hindu temples and Durga Pua venues will be hunted down. “Investigators are going through security camera footages to identify those behind the matters and the perpetrators will be brought to justice,” Deputy Inspector General (DIG) Anwar Hossain told the media in Comilla. 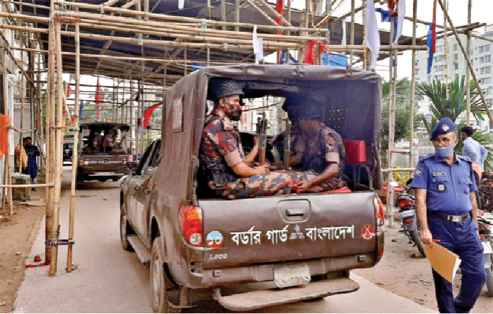 BNP and Jamaat-e-Islami goons planted a copy of the Quran at the feet of Ganesh in the Durga pantheon at Nanuyar Dighir Par Temple on October 12 night. “The miscreants took some pictures of this and ran away. Within a few hours, using Facebook, the propaganda spread like wildfire with the provocative pictures," said a district official

The ruling Awami League workers swung into action along with police to cordon off the Durga Puja pandals and temples. Later in the day, more units of security forces were deployed in Comilla town and other sensitive  areas of the district and elsewhere in the region.

The Religious Affairs Ministry said it had come across news that the religious text had been “disrespected” in Comilla, but urged members of the public not to take the law into their own hands  and reiterated calls to maintain religious  harmony and peace.

Border Guard Bangladesh personnel were deployed in Comilla in the face of rising communal tensions. BGB’s Comilla Battalion commander, Lt Col Fazle Rabbi said: “Four platoons of the BGB were deployed at noon to ensure that there is no unrest in Comilla. The BGB has been deployed to prevent any hostilities.”

The Bangladesh Hindu Unity Council appealed for calm. “We would like to say to our Muslim brothers, please do not believe the rumours. We respect the Quran. There is no need for the Quran in Durga Puja. This is someone conspiring to create a riot. There will be a fair investigation. Please don’t attack any more Hindu temples,” it said, in a statement circulated widely through Facebook and You Tube.

But Bangladesh Hindu Buddhist Christian Oikya Parishad General Secretary Rana Dasgupta said: "Already, temples are being attacked countrywide, including Banshkhali in Chittagong, Pekua of Cox's Bazar... the communal threat has been spread countrywide. We are going to decide to stop music and use of mikes as a protest... cannot stop the rituals at that moment.”

“The District Commissioner of Comilla told me, ‘All are ‘fake photos' in social media.’... So, what is the role of the State, why doesn't the administration stop Facebook or any social media to assure the security of the Hindu community?

“All of these are prejudicial acts... it is the same practice of political crime, ethnic cleansing practice, to clean 10 per cent Hindu community, which increased 2 per cent in last 10 years, as the government report says. It is a positive sign, which is targeted by the communal groups. It breaks the confidence of the Hindu community. We want the proper responsible role of the administration and political parties,” said Dasgupta.

In March this year, over 80 houses of Hindus in the village of Sunamganj, Bangladesh were attacked and vandalised by the supporters of Islamist group Hefazat-e-Islam. The attack was planned after a young Hindu man criticised Joint-Secretary General Maulana Mufti Mamunul Haque in a Facebook post as reported by Dhaka Tribune.