Murlikant Petkar, now 73 years old, lives a retired life of a senior citizen in Pune. In 1965, Petkar was a soldier of the craftsman rank in the Electronics and Mechanical Engineering Corps. He was visiting Jammu and Kashmir when his Army camp came under aerial attack from Pakistani troops. He received multiple bullet injuries and was also run over by the Army vehicle in the chaos. Rendered physically challenged for life, he was advised by a physiotherapist in the Navy hospital in Mumbai to take up sports as part of his rehabilitation. He tried his hand at table tennis, athletics and swimming and represented the country in all three sports. Petkar was born when the country attained Independence in the Sangli district of Maharashtra. In 1972 Paralympics he participated in Men’s Slalom 3, Men’s Shot Put 3 Men's Javelin, Men's precision Javelin Open besides 50 m freestyle swimming event. He reached the finals in all his events, winning gold in 50 m freestyle swimming. 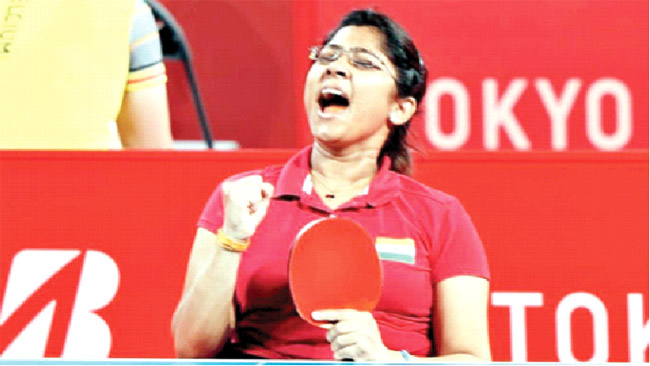 But things were not easy for Petkar. He had to struggle for funding and could not participate in Paralympic Games, though he was in top form. But this is New India and Petkar is watching a fresh avatar of his country emerging in the 75th year of its Independence. In Tokyo Paralympics 2020, it’s for the first time that India has touched double digits in terms of medals in the game’s history. In fact, from its debut in 1968 to Rio Paralympic Games in 2016, India had 12 medals. In all likelihood, India will surpass this tally in this game itself. What does it take to be a Paralympics champion? If we critically analyse the journey of Murlikant Petkar and those who won the medal for the country in the Tokyo Paralympics, we find one thing in common. They have found inner gold. Their quest for gold in sports is a byproduct. In her book Finding Your Inner Gold, one of the most popular para-Olympian ever, Carol Crooke, writes, the secrets to finding your inner gold lies in overcoming adversity, accepting change, finding your hidden courage, and creating a winning mindset. If you dare to face your fears and believe in yourself, you can overcome anything. 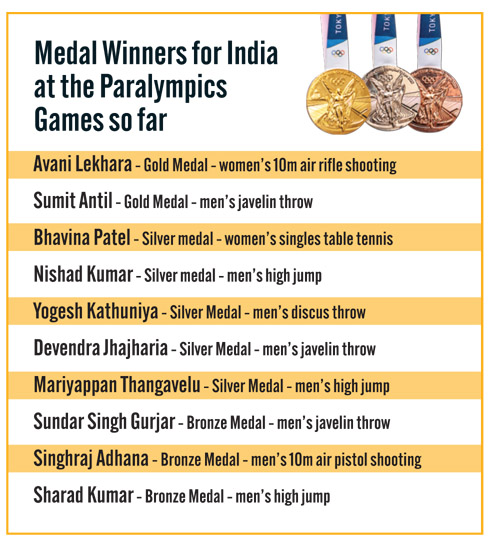 Let us see how these champions of real life had overcome every hurdle they faced before scripting a golden chapter of sporting excellence.

On February 20, 2020, when Avani Lekhara was 11 years old, she had a major car accident. The accident damaged her spinal cord. After the paralytic attack, her body below the waist ceased to function. Her father Pravin Lekhara says, ‘She was an active child who participated in extracurricular activities. But, after the accident, her entire life changed. She had seething rage against herself. She stopped talking to anyone. We could not see all this and we had to do something. In order to change her environment, I brought her to the JDA Shooting range in Jaipur. Gradually, she started developing interest in the game’. After reading India’s first-ever individual gold medal winner’s Abhinav Bindra’s autobiography, Avani Lekhara, took up the sport with all seriousness. Inside, she started dreaming of emulating her feat. In the Tokyo Paralympics, the 19-year-old created history in her debut campaign by becoming the first Indian woman ever to win a gold medal, finishing on the top in R2 women’s 10m Air Rifle Standing.

Sumit Antil was a sportsman from a young age. Coming from Sonepat in Haryana, he idolised Yogeshwar Dutt and wanted to be a wrestler like him. His wrestling dreams were cut short after he met with an accident in 2015 while travelling for his tuition. His leg has to be amputated from below his knee. He has to be on a prosthetic leg. While Sumit was finding it very hard to give up on his wrestling dreams, he was introduced to para-sports by Rajkumar, a para-athlete in his village. AFI para-athletics javelin-throw coach Naval Singh advised Antil to take up the javelin throw. Sumit now had a goal in his life again. In the Tokyo Paralympics, Sumit Antil thrashed his record thrice en route to gold.

Bhavinaben Patel was afflicted with polio as a toddler and has been using crutches since then. After her schooling in Sundhiya, a village in Gujarat’s Mehsana district, she moved to Ahmedabad to pursue an ITI in Computer sciences. This proved to be a turning point in her life. “My mannerism, my way of speaking and my purpose in life-everything changed for the good. Before that, I never knew that a game like TT existed since I was living in a small village. But things changed so much after coming to Ahmedabad. I first played the sport for fun but a bronze medal at a national level club event in Delhi led me into thinking that I can do well in top national and international tournaments. I became passionate about it and soon I found myself obsessed with the sport. The obsession with table tennis reached a point where eating, food and sleep took a backseat in my life,” she said after winning the silver medal in the Tokyo Paralympics. Speaking about the robot which she owns thanks to the Target Podium Scheme, she says, “I got the robot from TOPS in 2020. It helped me improve my game. It’s a very advanced robot with advanced features. It throws the ball at you like a simulation. Otherwise Lallan sir was there most of the time to train me.”

When Devendra Jhajharia, at the age of 13 years, decided that he would become a javelin thrower, he didn’t do it because he had an eye on the medal. With his left arm amputated after it touched an electric wire, he was prey to bullying in his hometown of Churu in Rajasthan. “The children would make fun of me and call me weak. And I just wanted to prove I was strong enough. So I picked up the javelin to show I am not weak”: he says after getting the silver medal in the men’s f46 category javelin throw event at the Paralympics. His medal in Tokyo was his third at the Paralympics—starting with gold in Athens in 2004 and another in Rio in 2016. More importantly, Jhajharia seems to be defying age. His gold-winning throw at the 2004 Games—when he was 23-at 62.15m was a couple of meters short of his silver winning throw of 64.30 in Tokyo when he’s 40 years old. What next? “I will continue, he says. The facilities I have today and my knowledge are far better than anything I had as a younger man. The support I am getting is something else. Back in 2004, when I won my first gold medal, I had to pay for my travel. My father had to take a loan for that. This time, I was much better prepared.” he added

Singhraj Adhana, 39-years old, contracted Covid-19 virus in the last week of May 2021, with his oxygen level dipping below 50. The para-shooter, who suffers from diabetes, was left searching for a hospital bed in Faridabad. Somehow he managed to find a hospital bed because of the intervention of the local MLA. Singhraj spent more than a week in the ICU and looked at the pictures of his grandfather, late Subedar Major Sumera Ram Adhana, a World War II veteran, to motivate himself. Singhraj recovered and won the bronze medal in the men’s 10m air pistol event in the SH-1 category. Singhraj had contracted polio when he was one year old and could walk on crutches until he was 15 years old. The time he spent with his grandfather in the village made him mentally strong and prepared him to face hurdles in life. 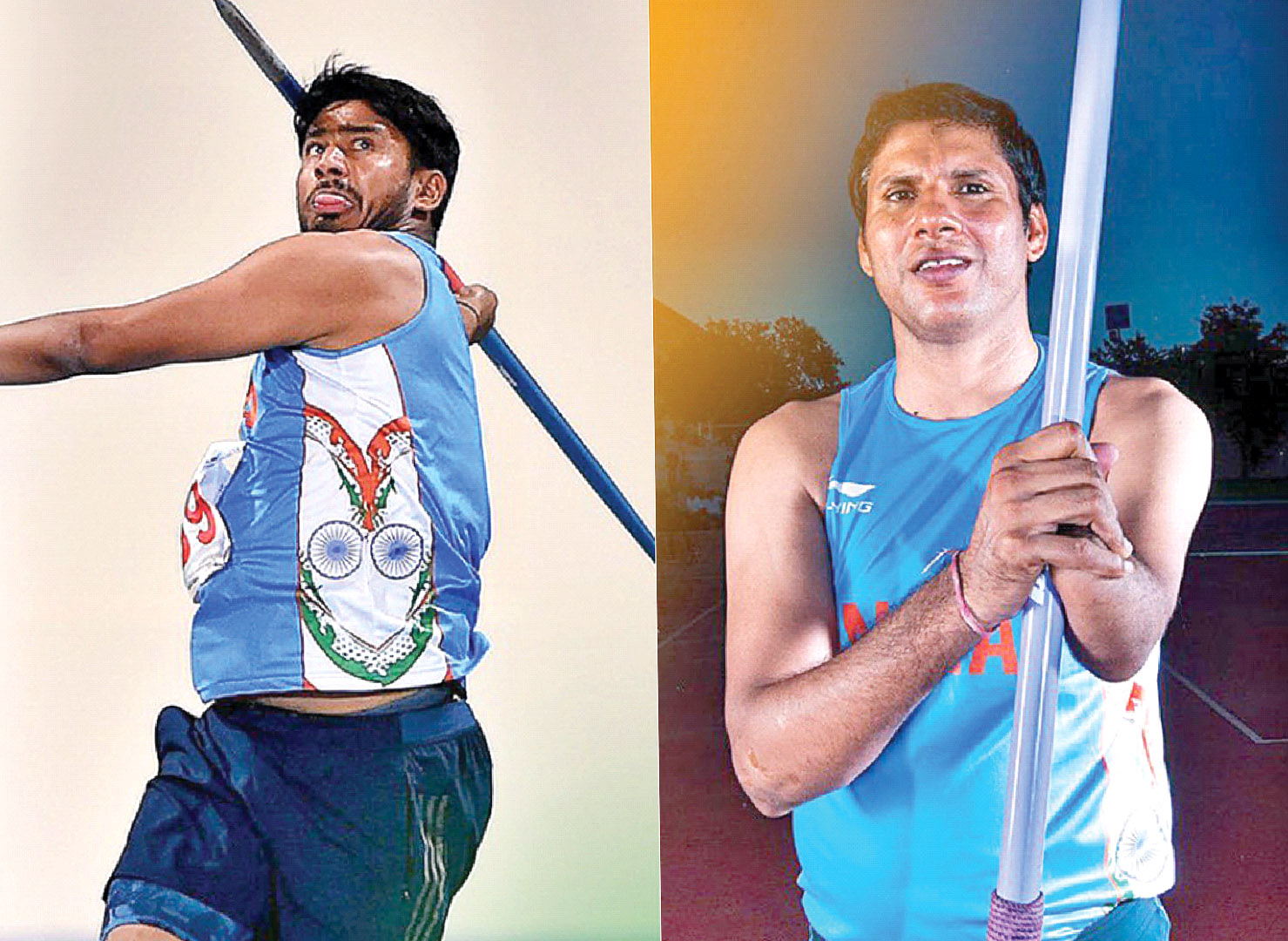 Sunder Singh Gurjar first began javelin throwing in 2012. He participated in athletics at the junior national level with athletes without disabilities. He had a terrible accident in 2015 that caused him to lose his left hand. His hand was cut by a metal sheet falling on his hand at a friend's house. Following this accident, he initially thought he had to stop being a javelin thrower, but he was introduced to para-athletics by RD Singh, who ran a training center nearby. Since then, Sundar has trained very hard to be a successful para-athlete. In 2016, Sunder Singh Gurjar was India’s best medal hope in the men’s javelin F-46 category, going into the Rio Paralympics. However, in a tragic turn of events, he was disqualified from the event after being just fifty-two seconds late at reporting to the registration desk. It was probably because Sunder did not speak English and could not understand the accent of the announcer. Crestfallen, he almost gave up the sport. He rose again and got a bronze medal for the country in the Tokyo Paralympics.

Yogesh Kathuniya, son of army men Gyanchand Kathuniya, was studying at the Army Public School in Chandigarh. At the age of nine, he was afflicted with a rare neurological disorder that ultimately led to marred limb coordination. Meena Devi, his mother-turned-physiotherapist helped Yogesh overcome the situation and stand on his feet. He turned his attention to para-sports in 2017—excelling in javelin and discus throw. Yogesh won the silver medal for India in the discus throw event at the 2021 Tokyo Paralympics. The opening ceremony of the Tokyo Paralympics started with the theme song, ‘We have the wings’. From Murlikant Petkar to Yogesh Kathuniya, it’s the story of finding inner gold and using the wings to fly. But Petkar had the limitations of resources which limited the height at which he could have flight. Para athletes of New India could now aim to fly stronger and higher undeterred
by limitations.

Also read: How the Chennai Super Kings were able to win four IPL titles by sticking to the funda ..

We are a country with more than 130 crore population so naturally, the expectation from the sports fraternity is very high. Every Indian in Tokyo Olympics and Para Olympics has cheered the performance of our athletes wholeheartedly.  Though the medal tally is just seven in the Olympics however it is the best performance to date and the performance by our Para athletes is exceptional. We had performed badly in the past owing to many reasons. However, we are far behind China, the USA, Japan a ...