Younis' comment on Mohammad Rizwan offering namaz during the drinks break in the India-Pakistan game in the ICC T20 World Cup on Sunday had not gone down well with former cricketers and Pakistan fans.

"Hinduon ke beech me khade hoke namaaz padi, that was very very special for me" - Waqar .
Takes jihadi mindset of another level to say this in a sport. What a shameful man.

Cricket commentator Harsha Bhogle condemned Waqar's comments and expressed his disappointment in a series of tweets. 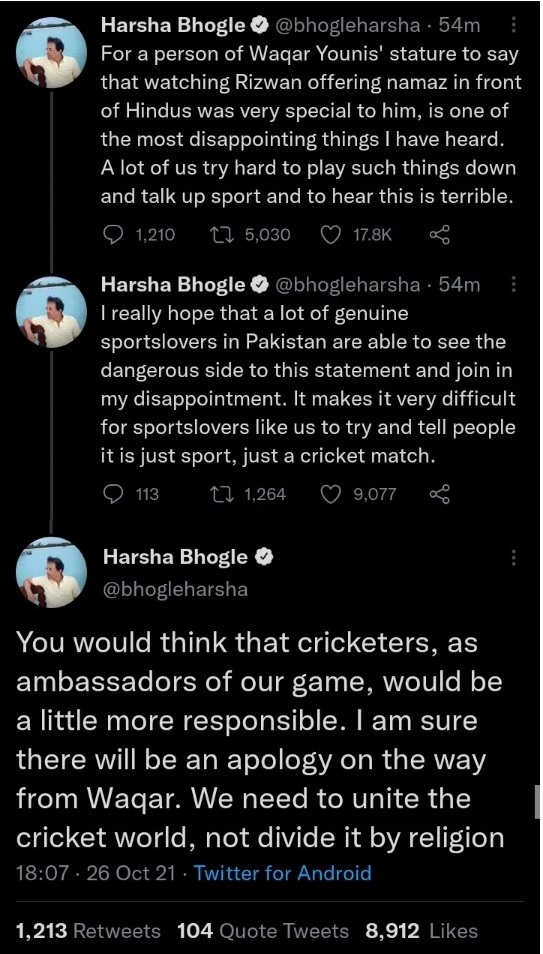 While cricket fans across both nations have lauded Pakistan's dominant performance, former pacer Waqar finding joy in something beyond cricket had left fans unimpressed.

"The manner in which Babar and Rizwan batted, the strike-rotation, the look on their faces, it was amazing. The best thing, what Rizwan did, Mashalla, he offered the Namaz on the ground surrounded by Hindus, that was really something very special for me," said Waqar on ARY News.

After facing severe backlash, Younis on Wednesday apologised for his comments.

"In the heat of the moment, I said something which I did not mean which has hurt the sentiments of many. I apologise for this, this was not intended at all, a genuine mistake. Sports unites people regardless of race, colour, or religion. #apologies," Younis tweeted.
Mohammad Rizwan and skipper Babar Azam performed a remarkable show on Sunday as Pakistan thrashed India by 10 wickets at the Dubai International Cricket Stadium.

Also read:IRCTC to run 'Rampath Yatra' train from Gujarat to Ayodhya on December 25 ..

Police recovered one AK-81 Rifle with magazines, AK-86 with magazines, M-16 A4-UBGL (40 mm Grenade Launcher) magazine, M-16 with a magazine, RPG Launcher, one RPG Shell, 13 AK-56 with 13 and many more in Thoubal district.   Imphal: The Manipur police on Sunday (November 28) recovered a huge cache of weapons in Thoubal district. Police Sources confirmed that the recovered foreign-made automatic weapons belonged to some terrorist group and were hidden to transport to some other ...