Suvendu Adhikari met the Deputy High Commissioner of Bangladesh in Kolkata over last week's violence at an Iskcon temple and other places in the neighbouring country's Noakhali and several other places.

New Delhi: "Why is Mamata Banerjee silent for the last five days," screamed BJP leader Suvendu Adhikari, questioning the double standards of the Trinamool Congress regime in West Bengal over the repeated incidents of vandalism and a ghastly attack on Hindus in Bangladesh.

"Cry, the beloved country," tweeted writer Taslima Nasreen, who also shared some photographs displaying the agony of Hindu minority women in her country.

A delegation led by West Bengal Leader of Opposition and BJP leader Suvendu Adhikari on Monday, Oct 18, met the Deputy High Commissioner of Bangladesh in Kolkata over last week's violence at an Iskcon temple and other places in the neighbouring country's Noakhali and several other places. 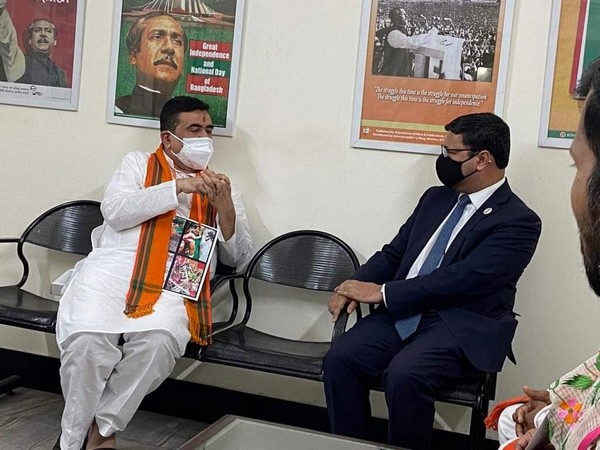 "We are indebted to Hindu population and Hindu voters, just as we are indebted to our party," Mr Adhikari said, adding, "the minority Hindus are living in extreme fear psychosis in Bangladesh. These are true cases of violation of human rights. Nine people including a Iskcon temple priest have died there in the violence".

"As many as 500 Durga puja pandals, considered the major festival of Bengalis, were vandalised and 200 temples attacked. We met Deputy High Commissioner of Bangladesh and urged them to take urgent steps to stop the violence," he said.

"The kind of violence we are seeing has surpassed what had happened in 1971," Mr Adhikari said, adding, "there could be reactions also".

Talking to journalists, Mr Adhikari lashed out at Mamata Banerjee and said after 2019 polls, she had described Muslim voters as "milching cows". "She is not quite concerned about Sanatani (Hindu) people," said Mr Adhikari, who had defeated Mamata Banerjee in Nandigram.

A mob vandalised an Iskcon temple in Bangladesh's Noakhali district last Friday and killed one of its members. The religious organisation took to Twitter to say that the temple suffered "significant damage" during the attack.

According to Iskcon authorities, a mob first vandalised a Durga Puja pandal adjacent to the temple in Noakhali before attacking the devotees in the Iskcon temple. The idol of Srila Prabhupada, the founder of Iskcon, was allegedly desecrated, and books were set on fire.

"We will definitely intensify our protest if these things are not stopped," Mr Adhikari said.

Violence first broke out in the Comilla district, and at least four people initially died in the violence. Alarmed by a series of attacks on Hindu temples in Bangladesh, India, on Oct 14, said that the Indian High Commission is in close contact with authorities in Bangladesh.

"We have seen some reports of attacks on religious gatherings in Bangladesh. We note that the Bangladesh government has reacted strongly to it. We also understand that Durga Puja celebrations continue in Bangladesh," MEA spokesman Arindam Bagchi told reporters.

Bangladesh Prime Minister Sheikh Hasina has said that a thorough investigation is underway.

Meanwhile, the BJP's IT cell chief, Amit Malviya, tweeted saying, "The impunity with which religious freedom of Hindus in Bangladesh is being trampled, reiterates the importance of CAA, humanitarian legislation.

Mamata Banerjee's opposition to CAA and studied silence now should worry Hindus of West Bengal, who too are facing marginalisation under TMC."

Also read:GST collected in November 2021 second-highest since its implementation ..

Locals are protesting as the CPEC project has not benefited the people of Balochistan while people of other provinces are enjoying the fruits of the megaproject.   Islamabad: Massive protests have rocked Balochistan's Gwadar, where enraged locals are demonstrating against China's multi-billion belt and road project. Locals have accused the Imran Khan government of transferring the resources to China. The protestors have demanded basic governance even as authorities ...