"Sometimes said Mathura... Sometimes said Ayodhya... And now they are saying... Gorakhpur... Before the public, their party has sent them back home..." Akhilesh Yadav tweeted in Hindi.

Reacting to his statement, Yogi's Office tweeted in Hindi, "For Chief Minister @myogiadityanath, who considers 25 crore people as family, the entire state is his home. And the same people are going to declare him as their guardian again on March 10. What will happen to you?" 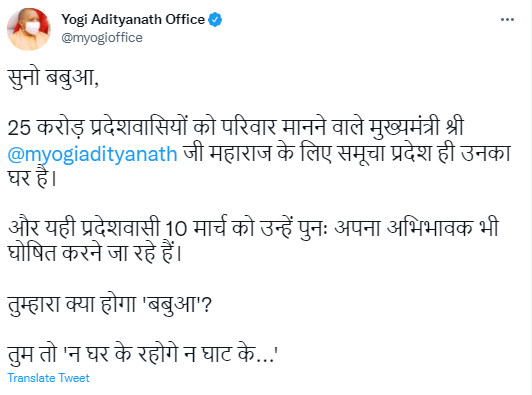 Adityanath has thanked the party top leadership for making him a candidate from Gorakhpur (Urban).

"Hearty thanks to respected Prime Minister @narendramodi, Honorable National President @JPNadda and Parliamentary Board for making me the candidate of Bharatiya Janata Party from Gorakhpur (urban) in the upcoming assembly elections," he tweeted in Hindi.
Putting all speculations to rest, the Bharatiya Janata Party (BJP) on Saturday announced that Uttar Pradesh Chief Minister Yogi Adityanath would contest from his stronghold Gorakhpur which elected him to Lok Sabha for five straight terms till 2017.

There was speculation earlier that Adityanath, who has never contested Assembly elections before, could contest either from Ayodhya or Mathura. BJP leader Harnath Singh Yadav had written to party national president JP Nadda and urged him to field the chief minister from Mathura.

Notably, the BJP won the 2017 elections winning over 300 seats in the 403-member Uttar Pradesh Assembly without announcing a chief ministerial face. Adityanath, who had played a crucial role in the BJP's poll campaign, took over as the chief minister of Uttar Pradesh on March 26, 2017.

Adityanath had fought the general election for the first time in 1998 from Gorakhpur when he was 26 and became the youngest MP in the 12th Lok Sabha. He is the head priest of the Gorakhnath temple in the city. He took over this position in September 2014 after the death of his spiritual "father", Mahant Avaidhnath.

Dr Abhay Jere on Innovation, Entrepreneurship, and Education in India — Schools to Startups

Your achievements are bigger than your age: PM Modi tells Bal Puraskar awardee from Karnataka

Also read:Mansoor Khan* Arrested for Sexually Assaulting His Own Minor Daughter, and Forcing He ..