Time to Confront The Menace of Love-Narco Jihad

A march against ‘love jihad’ in the western city of Ahmedabad in 2018
The recent declaration by Pala Bishop Mar Joseph Kallarangatt is a reality. Love Jihad and Narcotic Jihad is a tool to strengthen Islamic terror groups while meandering along with Maoist forces. The revelation by Bishop must be taken seriously by the Government

The Love Jihad has become the latest menace in Kerala. When RSS raised it, most of the liberal intellectuals called it political offshoots. This time Bishop. Mar Joseph Kallarangatt, Bishop of Palai, has categorically accused a section of the Muslim community of targeting Christian girls through love jihad and narcotic jihad. He endorsed this with subsequent reports and bytes of State police chief of the State. These groups, according to him, have been using different strategies to run the show. Pointing out that there has been to a sharp rise in cases of young Christian women being subjected to abuse or religious conversion after eloping with men from other community, the Bishop warned that these “jihadists” had already cast their nets over places including schools, colleges, training centers and even commercial centers.

Regarding the “narcotic jihad”, the Bishop said the rising number of drug cases were a pointer to the practice’s existence. “These gangs operate out of the ice-cream or soft drinks parlours and restaurants run by jihadists and deploy different types of narcotics as a tool to destroy non-Muslims. The rising cases of rave parties reinforce these facts. The incidents of religious hatred in the domain of art and culture, programs that seek to cast aspersions on other religions, the business strategies like halal food, major real estate deals at inflated prices, parallel telephone exchange, armoury shops are all part of larger scheming. When five years earlier, the Hadiya case was brought this issue to the nation. Many secular fronts and liberal thinkers wrote that it was an imagined story by Right-wing organisations. As things moved and courts took cognisance of the matter, things became more transparent. NIA found the involvement of a team involved in the conversion of Hindu and Christian girls to Islam.

Jihad is an Arabic word, which is closely associated with Islam and its history. Jihad means making a determined effort to oppose something or achieve an ideal or a noble goal. However, with the rise of extremism in many countries, it is now being used rather negatively to denote the use of violence. The word love jihad is a rather recent development. Jihad means using love and sex to convert people to Islam or establishing dominance over them. Love Jihad or Romeo Jihad is a process under which young Muslim boys and men target young girls for conversion into Islam by pretending as real lovers. In December 2009, Justice KT Sankaran of Kerala High Court found indications of forceful conversions. 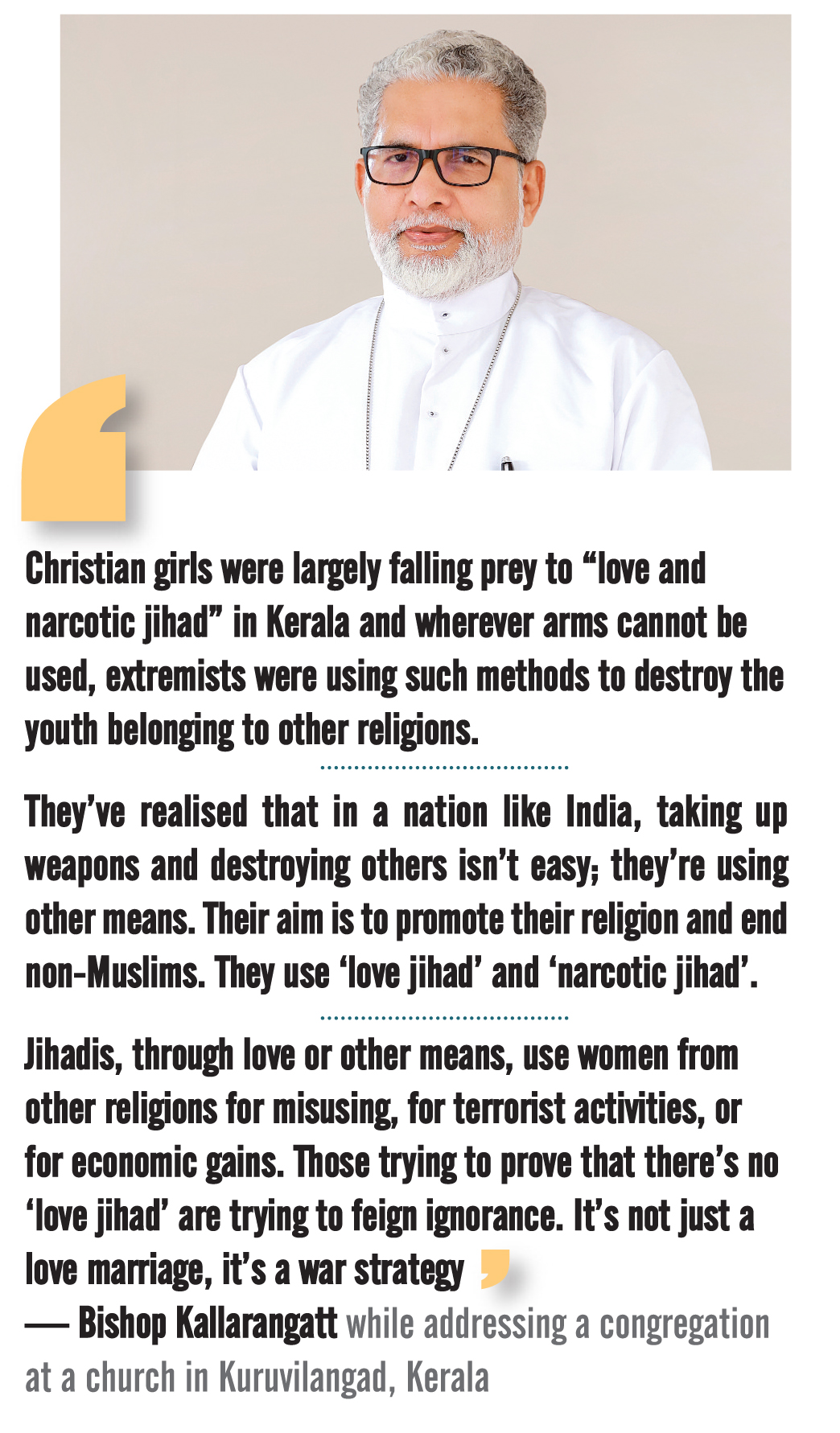 The radical Islamist organisation, Popular Front of India (PFI), has deep roots in Kerala. After banned on SIMI, a radical Islamist organisation namely National Democratic Front (NDF) was formed. Simultaneously Abdul Nassar Madani launched a Muslim outfit called Islamic Seva Sangh, aka ISS. The PFI is an umbrella organisation of various political and non-political entities and trusts like Campus Front of India, All India Imam Council Confederation of Human Rights Organisation. According to a Home Ministry dossier, the PFI has around 60,000 regular members and 85,000 sympathisers in Kerala. Sathya Sarani Islamic Dawa Institute, a mysterious Islamic conversion centre also comes under the PFI.

Post-Independence India has a unique conceptualisation of modernity. The marriage of a Hindu girl with a Muslim boy was considered a great leap of modernity. The Nehruvian socialist in the name of secularism corroborated and planted in campuses. To a large extent, the divisive agenda worked. It was more systematic because Kerala was under the political system of the Left or the Congress combined. The change of the political system at the Centre took meant that the. RSS picked up the issue. Many leaders of the organisation went to the Northern parts of Kerala and highlighted the matter with the Home Ministry. Ultimately the ISIS recruitments and radicalisation caught the attention of the nation.

Kerala is not a poor state. The mushrooming of Islamic organisations narrates a different story. Youth of Kerala have been migrating to West Asia and other Islamic countries. Many of them move to Afghanistan, Saudi Arabia, Yemen and Islamic countries. The funds from Saudi Arabia started flowing in. The funds were systematically used to wean the minds of youth. Over the period of time, some of the northern districts of Kerala adopted the lifestyles of Arab. Girls started wearing Arab outfits and adhering to their dress code with burqa. Schools and colleges mushroomed with bearded males. TV evangelists like Zakir Naik became the most popular figure in the State. These were the early signals of radicalisation of a state which was doing much better than other states. In all cases, Muslim youths are radicalised by the educated class of their community, such as Islamic clerics, Islamist editors, and mosque leaders. Hindu and Christians cannot open their shops during Ramzan. Charitable and black money is pumped in Kerala in a major way, and mosques and churches are receiving lots of it. All NGOs of Islamists organisations have links with political parties. They enjoy influences and power over them. PFI has been taking over control of mosques and some Muslims under its umbrella.

The Mujahid movement preaches a puritan version of Islam and opposes Sufi practices. From their corpus of ideas, it grew the radical Islamist group National Development Front (NFD), now known as PFI, which has roots in the Students Islamic Movement of India (SIMI), a banned militant group seceded from the Jamaat-e-Islami. By 1980 the Kerala branch of SIMI had declared slogans such as destroy nationalism, reinstate caliphate. Newspapers like Madhyamam, which the Jammat-e-Islami publishes, are radicalising Muslim youngsters. Radicalisation proposed to establish an Islamic state. They create a hate wave against the Hindu culture. There is an attempt to wean away Muslim youngster from local society.

Cocktail of Communists and Jihadis

Marxists are also rationalising Islamic extremism. Marxism thrives on poverty. But Kerala is not poor. In Muslim dominated regions like Kozhikode, Malappuram and Kasargod, there is sign of Arabian culture percolating down. Keralite restaurants advertise Arabic foods. Northern Kerala looks like a mini-Pakistan. Dattatreya Hosabale, General Secretary of RSS said, “There is definitely some nexus between Jihadi terrorists operating in Tamil Nadu, Karnataka and Kerala and the Communist Party of India (Marxisit) cadres”. A historian endorsed the same logic. Tarek Fatah, the author of Pakistan-origin, said, “The alliance between Islamist and Leftists-Sharia’h-Bolshevism is a dangerous threat to free speech and democracy”.

There are reports of Maoists joining hands with Jihadis. The experiment of alliances between CPI (M) and the Jihadis in Kerala succeeds in forming a counter against the nationalist forces; its impact will be disastrous for India and the entire world. The outfits have links with the Lashkar-e-Toiba and the Hizbul Mujahedeen. PFI has network with National Development Front (Kerala), Manitha Neethi Pasarai (Tamil Nadu), Karnatka Forum for dignity (Karnatka), and all organisations with radical ideology. There are many other organisations splashed in other states like Peace Educational Foundation (Kerala), Jamait ul Muflihaat (Hyderabad), Discover Islam Education Trust (Bengaluru), Tauheed Educational Trust (Bihar), Islamic Research and Dawah Centre (Mumbai), Islamic Information Centre (Mumbai) have emerged during the last few years, which have provided direct access to indoctrination materials.

The declaration by Bishop is a reality. It has been said time and again that Kerala is slipping into the hands of terror groups. Love Jihad is a tool. The aim is to strengthen Islamic terror groups with meandering along with Maoist forces. A couple of districts have become a hotbed for Naxals. Since the Indian subcontinent is facing the heat of Taliban occupying the driving seat in Afghanistan and flagging off Islamic terror signals, it will have larger implications. Therefore, Kerala to Kashmir has a link. The recent revelation by Bishop must be taken seriously by the State Government. If it does not, the centre must make a solid move to contain it.

Tesla was greatly impressed by the Vedantic knowledge propounded by the Swami on the relationship between force, matter and energy and underlined its similarity with the ideas of modern science Pratap Singh The analogy of Parasmani (also known as Philosopher's Stone) truly fits the personality of Swami Vivekananda. Similar to the said capability of Parasmani to convert iron into precious gold, the magnetic personality of this young Hindu monk, who completed his innings at a young ...

Also read:Pak security policy: Document of desperation and no mending of ways ..