Teacher Deepak Chand and Principal Supinder Kour, a Sikh woman was brutally killed by terrorists
The targeted killing of Hindus and Sikhs in the Valley is the new modus operandi of the Pak-supported Islamists who could not digest that Normalcy was returning to the Union Territory of Jammu & Kashmir post-abrogation of Article 370. Killings of non-Muslims has become a routine affair in ‘Kashmir’ to derail the democratic peace process in the valley

Brutal killing of four non-Muslims, in just seventy-two hours (October 5 to October 7) time span, once again is indicative  of the fact that the situation for the minorities in Jammu & Kashmir (J&K) continues to be grim. The religious killings are a recap of Kashmir of 1990s; the heart-wrenching grief of Kashmiri Hindus has resurfaced again after two decades of ethical cleansing of the Hindu population from the Valley. The only difference seems to be targeting individuals who stand by the democratic process instead of using mass persecution, as it is no longer viable in the ‘New Jammu-Kashmir’.

Just two days after the merciless killing of a well-known pharmacist Makhan Lal Bindroo and two other civilians on October 5, in a ghastly targeted attack, Pakistan-sponsored Islamic terrorists shot dead two non-Muslim teachers; one of them was a school principal, in the Kashmir Valley. Both had sustained injuries in terror attack and were rushed to a hospital but later succumbed to their injuries.

Bindroo, a Kashmiri Pandit, was one of the very few in members of his community who chose to stay back in Kashmir at the onset of militancy in 1990. The two teachers killed on October 7 were employed at the Government Boys Higher Secondary School located at the Sangam Eidgah Sangam area of Srinagar. One of them was identified as Principal Supinder Kour, a Sikh woman and a resident of Alochi Bagh area of the city, while the second victim was teacher Deepak Chand, a Hindu resident of Jammu.

According to the eyewitness, four to five teachers were having a meeting in the principal’s office when two terrorists barged in. The terrorists separated the Muslim teachers from the group and dragged two non-Muslim teachers, including the Principal, out of the school building. They then opened fire at them in the school compound and fled from the spot.

Creating an atmosphere of fear

Earlier this year, son of Krishna Dhaba’s owner was shot dead (Krishna Dhaba is a popular restaurant in Srinagar). The recent killings seem to be in continuation of a planned roadmap to eliminate prominent Hindu citizens and political figures of the Valley.

Alok Bansal, Director, Centre for Security and Strategy, India Foundation said to the Organiser, “The killings of non-Muslims and even outsiders actually show the desperation of the terrorists because their masters from across the borders asking them to vitiate the atmosphere as things are getting normalised to a great extent in J&K. And the normalcy is creating problems for them.”

“Also, we need to understand that with the rise of Taliban in Afghanistan some amount of euphoria is there amongst the terrorist outfits that if Taliban can defeat a superpower like US, then they can also probably succeed in their mission in J&K. That is why we are seeing a resurgence in terrorist activities in the Valley”, he added.

The killings of non-Muslims is an attempt to create an atmosphere of fear among those Hindus who are thinking of resettling in Kashmir.

Jammu & Kashmir expert Col. Jaibans Singh told Organiser, “The threshold of violence in Kashmir has witnessed a sudden spike in the last few days. Members of a particular community and innocent civilians are being targeted by terrorists. Such actions have always remained part of a larger strategy of terrorist masters sitting across the border to give a boost to their faltering presence in the Kashmir Valley and instill fear among the people.”

He further said that another reason for their desperation is prospect of return of the Kashmiri Pandits to their homeland. They wish to drive away these natives by creating a pall of fear. The terrorists and their masters, however, have again misread the situation. There is no fear within the Kashmiri Pandit community; they are determined to take back what is theirs. The security forces are also well poised in their counter-terrorism operations; these small pockets of terrorists that are carrying out such barbaric killings will be neutralised soon.

In Rajya Sabha, Minister of State for Home Affairs Nityanand Rai said that around 4,000 youth (Kashmiri Pandits) have moved back to Kashmir and have taken up jobs in various districts of Kashmir under the Prime Minister’s rehabilitation package. He revealed that 1000 residential units had been constructed and a total 6000 residential units are proposed for Kashmiri migrants. As per the report of the Relief Office set up in 1990 by the Jammu and Kashmir Government, a total of 44,167 Kashmiri migrant families are registered who had to move from the Valley since 1990 due to security concerns which includes 39,782 Hindu Migrant families.

The Government’s promise of return of Kashmiri Hindus seems to be a day dream if the selective merciless killing of the minorities didn’t stop. How to provide security to the minorities and nationalist is the big challenge for the government while ensuring the delivery of developmental projects on the ground.

On the killings, former MLC of Srinagar, Surinder Ambardar said Organiser, “The fresh spree of terrorist violence in Kashmir is an attempt to expand contours of radicalised Wahabi religious narrative into Kashmir by brutally mashing the symbols of nationalism and plurality. The heinous crime of genocide of Kashmiri Hindus from three decades is in its final phase. The time is ripe to recognise it as a radicalised civilisation onslaught. The deep concern is that Pakistan is targeting our people at her will in our territory which is not acceptable thereby proactive measures are imperative essentially in a time frame”.

The political process in the region and departure from ‘Bullet to Ballot’ started right after the Government of India had applied provision of the constitutional 73rd Amendment Act which paved the way for a three-tier government in the Union Territory and boosted the grassroots democracy. The successful completion of participative and peaceful District Development Council (DDC) & Panchayat election reflected the aspirations of the people of J&K.

But even after the historic passage of J&K Reorganisation Act 2019 political killing didn’t stop. Many political workers mainly of ruling party (BJP) were killed in different Incidents. According to official figures 40 political workers, including panchayat members and grassroots workers, have been killed by terrorists in Kashmir since the abrogation of Article 370 in August 2019. Around 30 of them were associated with RSS and BJP.

Giving his take over the killings of nationalist voices in the Valley Brig (Retd) Anil Gupta opines, “As far as killing of non-Muslims is concerned it is aimed at neutralising BJP since it is projected as a pro-Hindu party. In nutshell, the purpose is clear. To play to the tune of Pakistani masters, not let grassroots democracy to flourish and create a fear psychosis to ensure BJP does not gain popularity in Valley. It has political as well as terror angle involved to it because even Pakistan is against return of any form of political process or democracy in Kashmir. It wants to make Kashmir a Muslim state governed by Shariat law”.

The political killings in J&K started way back in 1989 when BJP Kashmiri Pandit Leader TL Tapiloo was shot dead. These killings are a tools is to hamper the democratic awakening in the Valley and an attempt to mute the sane nationalist voices who want to contribute to the development of the country and J&K. 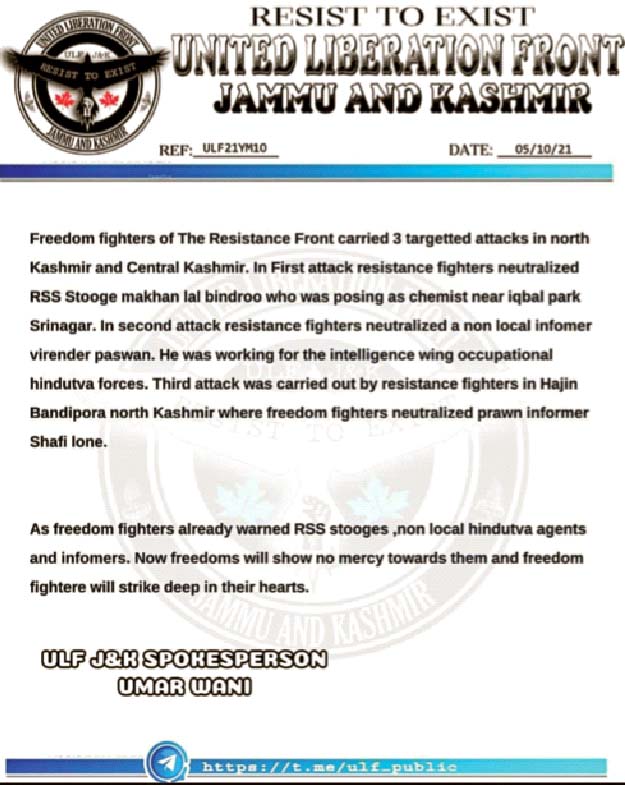 Over 5,000 pro-Indian political workers have been killed in J&K since 1989 while some estimates put this number at 7,000. But the latest spate of political killings has returned to haunt the Valley at a time when the violence was apparently on the decline. Compared to 2020, there has been a steep decline in militancy-related violence in J&K, according to official data. Till July 16, the number of such incidents officially reported this year stood at 67. Between January and June 30 last year, 105 such incidents had been recorded in the Union Territory.

If numbers are to be believed, for the first time in the last 6 years, the number of civilians killed is more than security forces killed by terrorists this year in J&K in various incidents. The killing of civilians includes prominent citizens.

The Resistance Front (TRF), the terror group which claimed responsility for the recent killing of Kashmiri Pandit Makhan Lal Bindroo in Srinagar, said it would carry out more such attacks. According to a statement by the TRF's spokesperson Umar Wani, Bindroo was killed because he was an RSS worker while Virender Paswan was a non-local informer of the Intelligence Bureau and Shafi Lone was also an informer.

According to the security experts, at a time when the newly carved Union territory has been moving towards normalcy, the top commanders of terrorist organisations have been killed, the stone-pelting incidents has become zero, the targeted killings of civilians and political workers are a matter of worry. The Government should seriously look into the issue as it will create an atmosphere of fear among those who want to return to the Valley as well as the Government’s rehabilitation process of Kashmir migrants.

Jammu & Kashmir Lieutenant Governor Manoj Sinha has also admitted that it was a failure of security agencies after the terrorists killed seven civilians in the last five days. This is part of a well-thought-out conspiracy in the backdrop of increasing tourist influx and planned industrial investment in Kashmir.

Dr Jaishankar had a wide-ranging discussion with Speaker of Knesset of Israel, MK Mickey Levy, Chairman of Foreign Affairs and Defense Committee Ram Ben Barak and had an important meeting with Israel's Alternate Prime Minister and Minister of Foreign Affairs, Yair Lapid. New Delhi: External Affairs Minister Dr S Jaishankar, who is on a strategically important visit to Israel on Tuesday (October 19), said he was much impressed with the "chemistry between Indian and Isra ...