Savarkar was a true disciple of Chatrapati Shivaji Maharaj, who had sent such letters and petitions to deceive the enemy and accepted the conditions of the 'PURANDAR TREATY, but avenged this insult after he became powerful.

Savarkar sent mercy petitions to the British to rescue himself. He not only asked for pardon but also surrendered by acknowledging that "I had a fair trial and just sentence & I will never take part in politics"; evidence of this is available in 'National Archives' in New Delhi (See: Krishnan Dubey and Venkatesh Ramakrishnan, Far from heroism -The tale of Veer Savarkar, 7 Apr 1996, Frontline) Recently Rahul Gandhi too blamed Savarkar for mercy petitions.

To anyone who has read Savarkar's biography or his autobiography 'My Transportation for life', the hollowness of this charge is immediately apparent. Rotting in British jails was not the aim of Savarkar's revolutionary struggle. Savarkar himself declares his motive behind his petitions for release, "It was my duty as a follower of responsive cooperation, to accept such conditions as would enable me to do better and larger work for my country than I was able to do during the years of imprisonment. I would be free thus to serve my mother country, and I would regard it as a social duty." (Savarkar, V.D., My Transportation for Life, Page 301). He also adds, "Whatever good I could do in the Andaman or whatever awakening I might bring about among its people was nothing in comparison with what I could do in India as a free man. On the other hand, in order to win my freedom, I would not stoop low or lend myself to anything mean or treacherous such as would bring disgrace to my country or be a blot on her fair name. Freedom thus obtained would have harmed the cause and would have been, as I regarded it, an immoral act." (Savarkar, p.245), so it's obvious that Savarkar would never betray his beloved country. 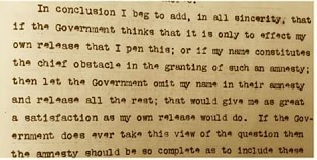 Savarkar's English friend, David Garnett, frankly expresses: "I could not endure to see a man with such intense vitality spending his life in prison" (Garnett, David, In the first volume of his autobiography, The Golden Echo, Harcourt, Brace and Company, New York, 1954).

Savarkar was a true disciple of Chatrapati Shivaji Maharaj. Shivaji, too, had sent such letters and petitions to deceive the enemy---before the slaughter of Afzal Khan, during Siddi Johar's besiege, and during his imprisonment in Agra. He accepted the conditions of the 'PURANDAR TREATY'. But, as soon as he became powerful, he avenged this insult. This is a part of a clever, tactical political stratagem.

When First World War broke out, Savarkar sent a petition to the Government of India in 1914. He averred the British to give Hindusthan Colonial Self-Government and a majority in the Central Legislative Council, and then the revolutionaries would help Britain in the World War. He quoted current instances of the European Governments setting their political prisoners free and even those of the liberation of political prisoners in Ireland. He added, "I offered to do without any release for myself personally. Let them release all the political prisoners in the country, leaving me alone in my own cell in the Andaman. I shall rejoice in their freedom as if it was my own." (Savarkar, p.187) This proves his selfless demands made on behalf of all the revolutionaries incarcerated in Andaman.

Savarkar, fully aware that the British would never release him, fearing the role he would play in the politics of India, therefore, stated before the Jail Commission, in 1920--"If you forbid me from entering into politics, I shall do social and literary work in India. I shall try to serve mankind in many other ways, and if I break any condition that you may impose upon me, you are free to send me back to this prison on transportation for life." (Savarkar, p.246) He conveyed much the same message in his discussion with the Governor, summarized as follows:

"Still, for a stipulated period, I agreed to take no part in politics, that is, in active, day-to-day politics. In prison, I could not, of course, do any politics at all. But when outside, I could do another kind of work, educational, religious and literary and serve my country in diverse fields. Generals, as prisoners of war, cannot conduct the war and come onto the battlefield. They are let off on parole after signing the pledge, like Lord Krishna, who agreed that he would not wield any arms during the continuance of the war. And it is considered no humiliation on their part to do so, and they consider it their duty to do so, in order that, later on, their services might be available to their nation by way of leading and guidance in other work." (Savarkar, p.302) Savarkar stayed away from open politics as per the conditions of his release, but did national service by actively pursuing a vigorous campaign of Social reformation, Script reformation, Language purification, Shuddhi (reconversion), pro-scientism, etc.

Most of the Political prisoners in Andaman in 1920 accepted and signed such terms of the agreement. "They would abstain from politics and revolutionary activity for a certain number of years and if again they were tried and found guilty of treason, they would come back to the Andamans to serve the remainder of their life-sentence." (Savarkar, p.254)

One need not go to New Delhi's 'National Archives' to see Savarkar's letter branded as the 'Mercy Petition', he himself has published it in his "Letters From Andaman" (letters which he sent to his younger brother Dr. Narayan Savarkar from Andaman) as letter no.8 dated 6-7-1920 (an original application which he sent to British has date 2-4-1920). A significant excerpt from it is as follows:

"As to the question so often put to me and others by officers no less exalted than the members of the Indian Cabinet 'what if you had rebelled against the ancient kings of India? They used to trample rebels under the feet of elephants. I answer that not only in India but even in England and all other parts of the world, such would have at times been the fate of rebels. But then why did the British people fill the whole world with a howl that the Germans had ill-treated their captives and did not allow them fresh bread and butter! There was a time when captives were flayed alive and offered as victims to Moloch and Thor and such other Gods of war!' The thing is this that this advanced stage in civilization attained by man is the resultant of the efforts of all men and therefore their common inheritance and benefits all. Speaking relatively to Barbarian times it is true that I had a fair trial and a just sentence and the Government is at liberty to derive whatever satisfaction they can from the compliment that they give a fairer trial and a just sentence to their captives than the cannibals used to do. But it should not be forgotten that if in olden days the rulers flayed their rebels alive, then the rebels too, when they got the upper hand, flayed alive the rulers as well. And if the British people treated me or other rebels more justly i.e. less barbarously, then they may rest assured that they too would be as leniently treated by the Indian rebels if ever the tables are turned."

All these proofs clearly indicate that Savarkar sought to deceive the British, but it deceived our countrymen instead! "Reading between the lines" is a valuable, necessary skill when reading any political resolutions, letters, petitions, etc. Those who take objection to Savarkar's letters either do not have that essential skill or are not willing to "read between the lines".

Can a man who became the first poet in the world who, deprived of pen and paper, composed his poems and then scratched them on the prison walls with thorns and nails be considered as crushed in spirit, shattered in will power, by his experience of hardships of Andaman jail life? No! This achievement of Savarkar is proof beyond doubt of his unfaltering mind.

Some also allege that Savarkar offered his might (??) to Montagu- Chelmsford proposals of 1919, which were rejected by all sections of Indians. Here is the truth which we can read in letters sent by Savarkar to Montagu and Governor-General: "I have further told them that if they granted real self-government to India with substantial elected majority in the Central Legislature and with no incubus of the Council of State upon it; and if they further granted full amnesty to Indian political prisoners in the country and outside, in India and in the Andamans, and to exiles in Europe and America---myself and many more like me will accept the new dispensation and, if elected to the Legislature, will exert to make the reforms a success. The Legislature that had all along treated me with scorn and indifference, and that excited an equal contempt in our hearts for it will, thenceforward, be our scene of action where we shall be proud to work and co-operate for the fulfillment of our aim." (Savarkar, p.220) It is unnecessary to say that the British reject these demands!

Savarkar never hid these letters, petitions, conditions. In his autobiography 'My Transportation for Life', he explained frankly and in great political strategy behind them all. So, let no one crow that they 'unearthed' or researched them from the National Archives, New Delhi, or from Andaman's Documents and 'exposed' them by publishing it!

Vietnam's Communist leader 'Ho Chi Minh' sent similar petitions that assured his cooperation when in Kuomintang prison. He expressed his desire at Marshal Chang to work for 'Dong Minh Hoi', formed in Indochina with the help of the Kuomintang government and rescued himself. ('Dong Minh Hoi' was formed to oppose Ho Chi Minh's 'Viet Minh' party) (Kanitkar, V. G., Vietnam: Arth & Anarth or Vietnam: Interpretation & Disaster, Manorama Prakashan, 1998, page 53). Ho Chi Minh admired Savarkar. In his room, He preserved a copy of Savarkar's book by his bedside giving mute testimony to this fact! Also, the Communists changed their loyalty overnight when Russia-Germany Non-Aggression Treaty broke & Russia joined the Allied side. Is it a political strategy when the Communists do it, but treason when it is Savarkar?!!

To conclude, "You can wake up sleeping person, but you can't wake up a person who pretends to sleep."

There have been several instances where Muslims can be seen offering prayers on roads, stations, parks and other public places if there is no mosque available and has become a contentious issue in India and throughout the world between Muslims vs Non-Muslims.   There has been a row over Muslims offering Friday namaz at public places identified by the administration for over a month. Locals and right-wing groups have objected to it because these permissions were given without the ...