Every indigenous ethnic group of the state celebrates Mera Hou Chongba, a cultural festival for the solidarity of Manipur.

Mera Hou Chongba is a cultural festival for the solidarity of Manipur. It is celebrated by every indigenous ethnic group of the state on the day falls on the 15th lunar day of Mera month of the Meitei calendar.

This year the state level festival was celebrated at Hayingkhobgbal with the Maharaja of Manipur, who is also the MP (Rajya Sabha); Chief Minister, N Biren Singh; legislatures and leaders of various communities. 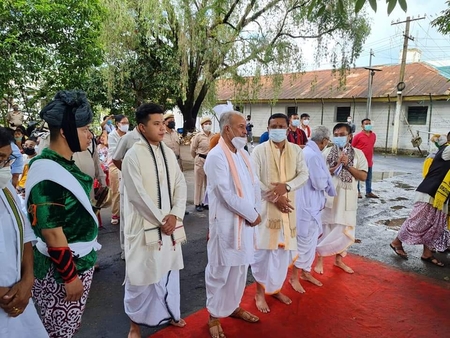 While addressing the gathering, Sunil Deshpande hailed the beautiful rituals and rich cultural heritage of the people of Manipur.

He also added that Manipuri culture represents the same Indian ethos, and we need to understand them.

Maharaja of Manipur, Leishemba Sanajajba, said that Mera Houchongba is the only common customary festival of all the state communities.

Also read:IRCTC to run 'Rampath Yatra' train from Gujarat to Ayodhya on December 25 ..

Police recovered one AK-81 Rifle with magazines, AK-86 with magazines, M-16 A4-UBGL (40 mm Grenade Launcher) magazine, M-16 with a magazine, RPG Launcher, one RPG Shell, 13 AK-56 with 13 and many more in Thoubal district.   Imphal: The Manipur police on Sunday (November 28) recovered a huge cache of weapons in Thoubal district. Police Sources confirmed that the recovered foreign-made automatic weapons belonged to some terrorist group and were hidden to transport to some other ...