PM Modi Strengthens Relationship with the US

On his seventh visit to the United States as the Pradhan Mantri of India, Narendra Modi arrived at the Joint Base Andrews outside of Washington DC, on a rainy September day. A heavy contingent of the members of the diaspora enthusiastically welcomed PM Modi despite heavy rains.

Much of the fanfare associated with Modi’s international visits - the ostentatious Howdy Modi-like event with 60,000 cheering crowd - was lacking this time due to the pandemic. However, a workaholic Modi was running a tight schedule, meeting foreign dignitaries, including President Joe Biden and Vice President Kamala Harris. Modi also participated in the first-ever in-person meeting of the Quad leaders and met businessmen and entrepreneurs. On the last day of his visit, PM Modi delivered his address to the 76th General Assembly of the United Nations (UNGA).

The “hesitations of history” speech by Prime Minister Narendra Modi given to the joint session of the US Congress in 2016 encapsulates the history of the Indo-US relationship. For the most part, from India’s Independence in 1947 until the last two decades, the relationship between India and the US has been mostly uneventful.

According to the former United States Ambassador to India, Richard Verma, the history of the Indo-US relationship is marked by “the periods of alignment, disinterest, frustration, and convergence” (Overcoming the Hesitations of History: An Analysis of U.S.-India Ties, Ph.D. dissertation, Georgetown University, 2020).

During the Clinton Presidency, the Indo-US relationship started moving positively when Bill Clinton initiated the decoupling of India and Pakistan policy. Presidents Bush, Obama, and largely transactional Trump kept that spirit going from the American side. However, despite the warming up of the relationship and increased diaspora involvement in US politics, American leadership still “does not count India as one of its closest friends and partners, and few would assert that we have become allies, natural or otherwise” (Verma, 2020).

Building On the Past

In his meeting with President Joe Biden and Vice President Kamala Harris, PM Modi sought to build on the works of past PMs P. V. Narasimha Rao, Atat Bihari Vajpayee, and Manmohan Singh. PM Modi also had a chance to work with presidents Obama and Trump. In one of the biggest restitutions of India’s stolen and looted heritage artifacts, Modi brought home 157 antiquities, including many moortis of our revered Devi-Devatas. 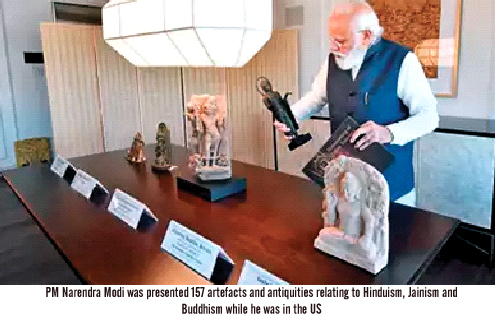 When Modi took to the podium, he spoke on behalf of a confident nation of 1.4 billion people with over 5,000 years of unbroken culture and history. Speaking in Hindi, Modi listed the achievements and accomplishments of his Government of more than seven years. Modi also highlighted India’s contribution to science, technology, vaccines, and peacekeeping

PM Modi participated in the two-hour-long in-person meeting of the Quad leaders - President Joe Biden of the United States, Prime Minister Scott Morrison of Australia, and Prime Minister Yoshihide Suga of Japan. The Quadrilateral Security Dialogue, also known as the Quad, is an informal security dialog with four member countries: India, Japan, Australia, and the US.

The Quad operated as the “Core Group” in the aftermath of the 2004 Tsunami with its humanitarian work. In 2007 the Dialog was initiated by Prime Minister Shinzo Abe of Japan. Last year, the navies of the Quad nations held a military exercise in the Indian Ocean. The group also worked on an agreement for vaccine production in response to the pandemic.

Some believe that the new strategic formation between Australia, the United Kingdom, and the United States (AUKUS) presents challenges to the Quad. Others, however, are optimistic. In a document of ‘Quad Principles on Technology Design, Development, Governance, and use’ released by the White House, the Quad leaders mention cooperation in the areas of health, environment, technology, education, and public welfare. “Technology should make the lives of our citizens more secure, prosperous, and rewarding, addressing some of the world’s greatest shared challenges, like equitable growth, climate change, energy security, and pandemic diseases,” the document read.

Prime Minister Narendra Modi’s US visit was punctuated by his address to the 76th UN General Assembly (UNGA) in New York. When Modi took to the podium, he spoke on behalf of a confident nation of 1.4 billion people with over 5,000 years of unbroken culture and history. Speaking in Hindi, Modi listed the achievements and accomplishments of his Government of more than seven years. Modi also highlighted India’s contribution to science, technology, vaccines, and peacekeeping. Invoking the memory of Swami Vivekananda’s speech, he “Today, the message from the world's largest democracy, for the international community, is still the same–harmonyand peace.”

Also read: Recognise Our Swa Is The Message Of Vijayadashami ..

Punjab/Conversion: Caught in the crossfire

The evangelical agenda was  always functional in Punjab from the colonial days. Now sikhi, propounded  by Gurus, is under threat both from Islamists and the conversion mafia   When the East India Company took over political control of Punjab in 1849, Christianity started attacking the indigenous religious practices of the region with full force. The advent of Christian missionaries in Punjab started in the decade of the 1800s itself. In the North-West province, seven Protest ...