Velappan was hacked 18 times by Moplah rioters in 1921. He managed to escape by jumping into a river
Hindu Genocide Day is being observed on September 25 to remember victims of 1921 Moplah riots

The Hindu Genocide of Malabar in the erstwhile Madras Province in 1921 was not an isolated event but a culmination of a slew of communal outbreaks which were happening intermittently throughout the 19th century. According to records, Malabar had witnessed nearly 51 such communally-inspired incidents of violence by Mappilas, mostly against hapless and unarmed Hindus. However, the events in 1921 differ in its scale, scope and degree even though the ideology, inspiration and the tools of motivation of the Mappila masses remained consistent.

The Malabar rebellion was a well-planned jihad against the British and the Hindu population. Fanatic Mappilas had indulged in mass killings, loot, rapes since August 1921. It spilled over to four taluks of Malabar spanning an area of 2,000 square miles. 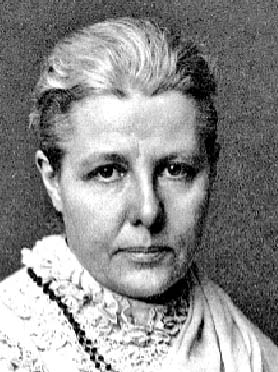 They (Moplas) established the Khilafat Raj, crowned a King, murdered and plundered abundantly, and killed or drove away all Hindus who would not apostatise. Somewhere about a lakh people were driven from their homes with nothing but the clothes they had on, stripped of everything — Annie Besant, Leader of  Home Rule League

Malabar comprised of the present-day districts of Palakkad, Malappuram, Kozhikode, Kannur, Wayanad, and parts of Kasargod. Of the total population of nearly 1 million, Mappilas formed nearly 32 per cent. In ErnadTaluk, which was the epicentre of the rebellion (which is roughly the present day Malappuram district), Muslims were in a majority.

In terms of participation of the Mappilas, we can say with some amount of certainty that a large percentage of the Mappila population of that area were either an actively or passively participated in the mayhem. According to the official sources, nearly 2,500 of Mappila rioters were killed, 1,652 were wounded, 5,955 were captured, nearly 40,000 were surrendered of which many of them were tried and convicted. This figure indicates that there was a widespread participation of ordinary Mappilas, including women and children. 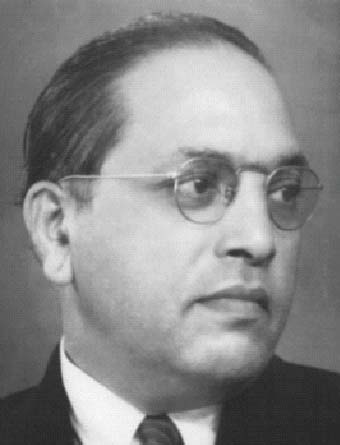 Beginning with the year 1920 there occurred in that year in Malabar what is known as the Mopla Rebellion. It was the result of the agitation carried out by two Muslim organisations, the Khuddam-i-Kaba (servants of the Mecca Shrine) and the Central Khilafat Committee. Agitators actually preached the doctrine that India under the British Government was Dar-ul-Harab and that the Muslims must fight against it and if they could not, they must carry out the alternative principle of Hijrat. The Moplas were suddenly carried off their feet by this agitation. The outbreak was essentially a rebellion against the British government. The aim was to establish the kingdom of Islam by overtihrowing the British government — BR Ambedkar

As far as Hindu victims are concerned, we do not have any official figures. Yet from the writings, statements of victims and available documents, we can conclude the riots claimed thousands of lives about 10,000. Estimates shows that nearly 300 temples were partially or fully damaged, properties worth crores of rupees belonging to Hindus were looted or burned. Nearly 2 lakh Hindu refugees reached in various relief camps in neighbouring districts.  One can vouch that no Hindu family were remained unaffected in Eranad.

The unspeakable violence committed by the Mappila mobs against unarmed and hapless Hindus was not an ordinary crime. By its entire attribute, it should be called as genocide. According the definition of the term genocide by Rome Statute of the International Criminal Court, killing members of a group or causing serious mental or bodily harm with intent to destroy, in whole or part, a national or religious group can be termed as genocide.

The intent of the Mappilas was very clear. They were determined to over throw the British Raj and to establish an Islamic kingdom, a Mappila Raj, with their own Islamic king, flag, seal and other paraphernalia, to be administered on the basis of Islamic legal system called Sharia.  However, very soon they found that this idea of Islamic State won’t be acceptable to the Hindus who constituted not less than 30 per cent of the population. Even the Hindu Congress leaders, who till then were supporting the khilafat cause, found that the actual khilafat in their own homeland is a nasty idea. They soon disassociated with the violence and left the region to safer places, leaving the ordinary Hindus at the mercy of marauding jihadi gangs.

Soon after the outbreak of the rebellion, Mappilas turned against Hindus, whom they were alleged to have collaborated with the British. Hence to eliminate the ‘problem of Hindus’, they pursued a policy of looting, destruction of Hindu properties,  discretion of temples, mass killings, rapes, forced conversion, etc., which resulted in mass exodus of Hindus. This was the method the Mappilas chose to deal with ‘kaffir’ issue.

The events happened in Malabar in 1921 is having an uncanny similarity with Armenian Genocide of 1915-16. In both the places, the Islamists wanted to have a ‘final solution’ to the ‘non-Muslim problem’. In Malabar, nearly all the Hindus were forced to vacate their farms and homestead and were to move to safer places. Else, they were captured, killed or compelled to convert. Jihadi goons ambushed the convoys of refugees and many were killed, robbed and raped. Those Hindus, who were fortunate to reach relief camps in Kozhikode or Shornur, lost everything except what they wore. 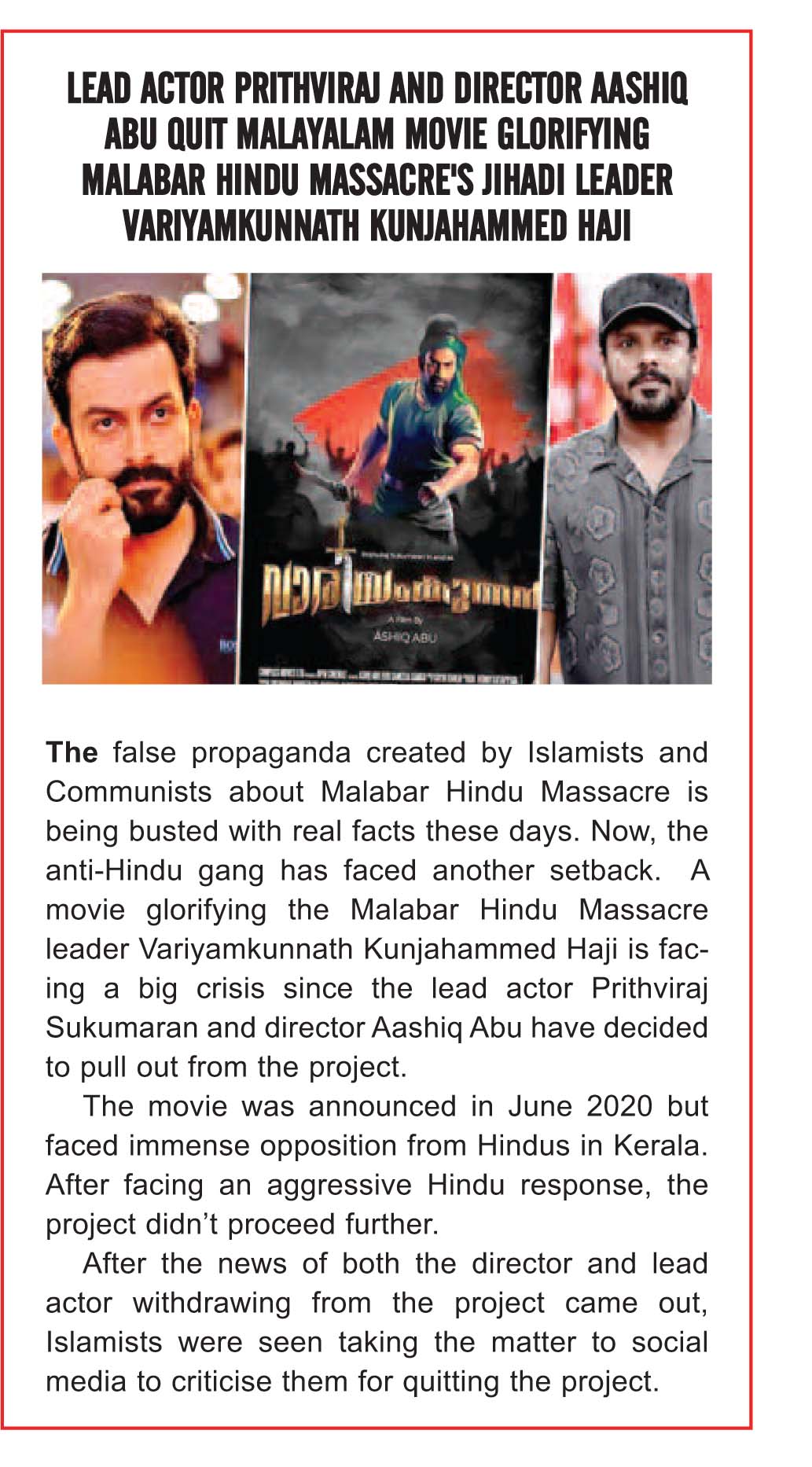 One of the unique kinds of barbarism which distinguish the Malabar Hindu genocide was the beheading and throwing half dead bodies in to open well, even before they actually died. In one instance, in a remote village called Tuvvur, near Nilambur, a party led by the infamous VariamKunnathKunjahammad, the most notorious rioter, had collected Hindus from the neighbouring village who were blamed to have ‘assisted’ British Army. These unfortunate souls were taken to the top of a barren hill and were ‘tried’ by a Sharia court. Having found to be ‘guilty’, they were beheaded and were thrown to an open well. Many of the victims were half dead.

Similar kinds of atrocities were unleashed in MuthuMana, in Kozhikode Taluk where it was said that three such wells were filled by dead bodies of the victims who were beheaded by jihadi goons. Many others were taken to riverside and beheaded; some others were burned to death.

Women were the worst sufferers of this tragedy. Scores of women were raped; many were forced to marry the same jihadi goon who killed her kin. Many were abducted and taken to far off places. Even the pregnant women were not spared.

"I don’t know why our politicians accepted Gandhi’s Khilafat agitation. With the mentality of the ordinary Mahomedan it was bound to produce the reaction it has produced: you fed the force, it gathered power and began to make demands which the Hindu mentality had to rise up and reject. That does not require Supermind to find out, it requires common sense. Then, the Mahomedan reality and the Hindu reality began to break heads at Calcutta. The leaders are busy trying to square the realities with their mental ideas instead of facing them straight...” — Sri Aurobindo

However, after Independence, a concerted attempt was launched to whitewash Hindu genocide by describing it as a ‘peasant uprising’, and as a ‘freedom struggle’. Communist government under EMS Namboodirippad, had even granted ‘Freedom fighter pension’ to these rioters and religious fanatics who participated in the ethnic cleansing of Hindus of that region.

On the other hand, Armenians who survived the genocide went ahead to document the event and made every effort to bring the truth before the world. As a result, World is observing April 24 as Armenian Genocide Remembrance Day.

It is in this context that Hindus of Kerala have decided to observe September 25 as Hindu Genocide Day.  This particular day was chosen because it was on this day in 1921 that Tuvvur tragedy had happened. 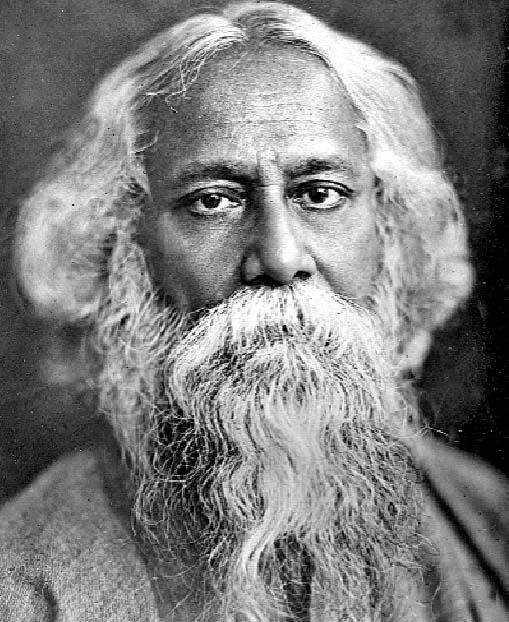 "A very important factor which is making it almost impossible for Hindu-Muslim unity to become an accomplished fact is that the Muslims cannot confine their patriotism to any one country. I had frankly asked (the Muslims) whether in the event of any Mohammedan power invading India, they (Muslims) would stand side by side with their Hindu neighbours to defend their common land. I was not satisfied with the reply I got from them… Even such a man as Mr. Mohammad Ali (one of the famous Ali brothers, the leaders of the Khilafat Movement-the compiler) has declared that under no circumstances is it permissible for any Mohammedan, whatever be his country, to stand against any Mohammedan.” — Rabindranath Thakur In an interview to the Times of India (18-4-1924)

For us, observance of the Hindu Genocide Day is not for opening up new hostilities.  Yet, Hindus of the Kerala is of the firm belief that justice has not been done to the victims and the bitter truths are deliberately suppressed. By whitewashing the Genocide, and by rewarding the rioters, it added insult to the injury. This scheme of things must go. This day is observed because present day and the future generation must realize the scale and depth of the violence and atrocities committed upon our forefathers so that we learn the right lesson from it. It will also strengthen our resolve that we Hindus won’t allow such genocide to be repeated again; despite of the fact that a few Muslim groups are still nursing the dream of re-establishing the Khilafat again.

Eternal vigilance is the price that the Hindus have to pay for securing their freedom, liberty and dignity.

Also read: "Border security needs to be strengthened. China, Pakistan and Turkey coalesced in an ..

Shri Guruji Golwalker who became the second Sar Sanghchalak of Rashtriya Swayamsevak Sangh in 1940, during his extensive organisational tour from 1940 to 1942, gave a call to the youth activists at every place to come out as pracharaks to spread the work. He said: “Today for Bharatmata pooja, we require flowers which are untouched, not smelled, not dried up, and not worn in the head; at the same time filled with fragrance, honey and charm.” Shri Guruji adopted an aggressive organisat ...