The 14-year-old victim was gang-raped on Tuesday night and was thrown on a road (Photo Credit: Outlook India)

The Rajasthan Government arrested BJP leaders who visited Ranthambore to meet Priyanka Gandhi Vadra, after a minor deaf, and mute girl was gang-raped in Rajasthan's Alwar and thrown on the road near a culvert in a profusely bleeding condition on Tuesday (January 11) night. On Thursday morning, a high-level team formed under the guidance of BJP state president Satish Poonia was arrested in Ranthambore, when they went there to meet Congress general secretary Priyanka Gandhi, who is camping in Rajasthan to celebrate her birthday. 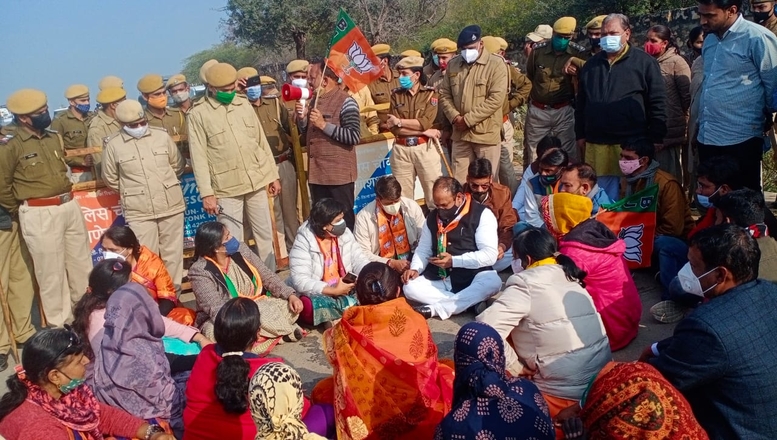 Alka Mundra told Organiser that a message was sent to Priyanka Vadra that the BJP team met her in the wake of a brutal rape reported in Alwar. However, no revert has come in from that side.

It needs to be reported here that the brutal rape incident resembling the Nirbhaya case was reported on Tuesday night and the girl's condition is critical. The girl was lying there in pain for around an hour on Alwar road when she was spotted by the public, who informed the police. The police then rushed the girl to a local hospital, where she was admitted to the ICU. As her condition was serious, she was shifted to Jaipur hospital late at night. The gang rape accused are yet to be identified even after the passing of one complete day.

Meanwhile, Superintendent of Police Tejaswini Gautam said, "The kid is presently at JK Lon in Jaipur. Our primary concern is her health and hence she was shifted there. We have formed an SIT team, including six SHOs who are searching for technical and scientific evidence to arrest the accused," she said. The minor was thrown near the culvert, Gautam informed. He said, "We came to know that the minor was missing from a nearby village Malakheda at around 4 p.m. on Tuesday. We informed her parents and they identified their kid."

The police are on the lookout for the accused. CCTV footage is being checked, informed officials. Superintendent of JK Lon Hospital, Dr Arvind Shukla, said seven doctors are treating the girl. It also includes gynaecologists and plastic surgeons. A sharp object has badly injured the girl, said the doctor.

Officials confirmed that many organs of the minor deaf and mute girl gang raped in Rajasthan's Alwar have been damaged, as a sharp-edged object was inserted into her body. A team of five doctors performed surgery for 2.5 hours, Dr Arvind Shukla said. Her rectum was injured, and she was bleeding when brought to the hospital. There is a sharp cut in her private part. Doctors have performed plastic surgery, and she has been shifted to the ICU in JK Lon hospital. An SIT team was formed on Wednesday to search for the accused.

The 14-year-old victim was gang-raped on Tuesday night and was thrown on a road. The passersby reported the matter to the police, who rushed her to a hospital. Later, as her condition worsened, she was shifted to the JK Lon hospital. Several officials and ministers have been visiting the hospital to get her health updates. Police officials said that the incident reminded them of the 2012 Nirbhaya gang rape case in Delhi.

Dr Abhay Jere on Innovation, Entrepreneurship, and Education in India — Schools to Startups

Your achievements are bigger than your age: PM Modi tells Bal Puraskar awardee from Karnataka

Also read:Mansoor Khan* Arrested for Sexually Assaulting His Own Minor Daughter, and Forcing He ..