Earlier in July, the Jammu & Kashmir administration had sacked 11 of its employees, including sons of Hizbul Mujahideen chief Syed Salahuddin and two from the police department over allegations of similar nature

In a big move, Jammu & Kashmir Government has sacked six employees over their alleged terror links, including working as overground workers for the terrorist groups, on September 22.

According to sources, two constables, two teachers, a senior officer of the Forest Department and an employee in the R&B Department, are among those given the marching orders.

The Government issued the order after a designated committee in Jammu & Kashmir was set up to scrutinise and recommend cases under Article 311(2)(c) of the Constitution of India. It recommended their removal from Government service over their terrorist links.

Earlier in July, the Jammu & Kashmir administration had sacked 11 of its employees, including sons of Hizbul Mujahideen chief Syed Salahuddin and two from the police department over allegations of similar nature. Prior to this, DSP Devendra Singh was also dismissed from the service.

Meanwhile, the National Investigation Agency is also investigating a case of narco-terrorism where employees of a cooperative bank were arrested for terror funding.

In an important move on September 16, it was decided that the Government of J&K headed by Lt. Governor Manoj Sinha will undertake discrete verification of the character and antecedents of its employees in the wake of the reports of direct or indirect involvement of some of the Government employees in terror activities. 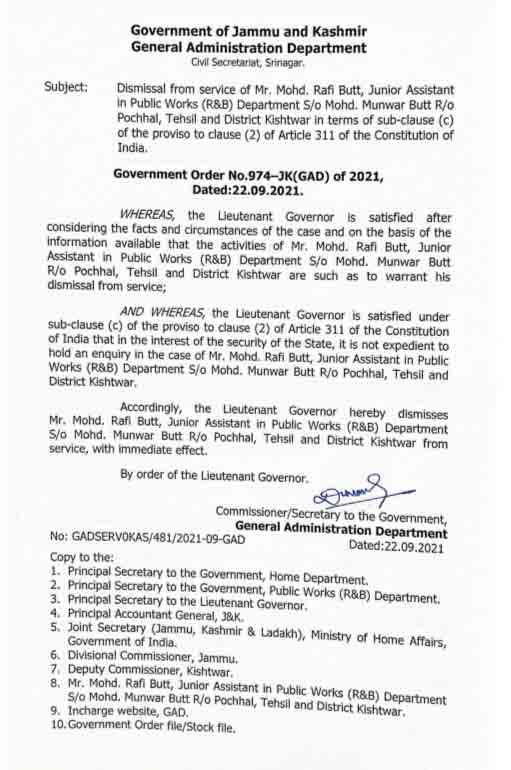 In the order issued by the General Administration Department under the signature of Manoj Kumar Dwivedi (Commissioner/ Secretary of the Government), the administration has once again asserted that it is mandatorily required for employees to maintain absolute integrity, honesty and allegiance to the Union of India and its Constitution and do nothing unbecoming of a Government servant.

The Government order further notes that employees are bound by the J&K Government Employees Conduct Rules, 1971.

The administration has categorically defined parameters of discrete verification under seven broad categories. This includes involvement in any act of sabotage, espionage, treason, terrorism, subversion, sedition, secession, facilitating foreign interference, incitement to violence or any other unconstitutional act. Employees must not keep any association or have sympathy with those attempting to commit any of the above acts or involved in aiding or abetting, or advocating the above acts.

In July 2020, the Jammu & Kashmir Government had introduced amendments in the service rules of employees to spot and quick dismissal of employees who are a threat to the security of the newly formed Union Territory. The amendments were made to terminate anti-national employees without facing judicial scrutiny if the evidence is concrete.

India's External Affairs Minister S Jaishankar met Israeli President Isaac Herzog and discussed changes in the geopolitical landscape.     Expressing his happiness to meet Herzog, Jaishanakar said that he deeply appreciated the Israeli President's commitment to taking "our bilateral ties to the next level". "Delighted to call on President @Isaac_Herzog. Our conversation covered changes in the geopolitical landscape. Deeply appreciate his visible commitment t ...