Over 400 bighas or roughly 132 acres of encroached land have already been freed in Hojai, Karimganj, and Darrang districts from illegal migrants
Religious intolerance, discrimination against Muslims,  violation of human rights, etc. have been deliberately woven to camouflage the real problem that cannot be understood simply as a Hindu-Muslim concern. It has more to do with the land rights of the natives and the constant threat posed to their lives and livelihoods by immigrants

The recent incident at Gorukhuti near Sipajhar in the Darrang district of Assam is just another dreadful manifestation of a problem plaguing Assam since the pre-Independence era. It is a part of the larger conspiracy of making Assam an Islamic State, oft-quoted as the policy of Lebensraum by several Bangladeshi academics and political leaders on numerous occasions. In the post-Independence era, this thought process has received academic and moral support from an entire network of self-proclaimed “intellectuals”, journalists, writers, public speakers, and a few lawyers and human rights activists.

The Congress Party and the Communist leaders have been responsible for providing fuel to such devious political designs for a long time now. They are always on the forefront of accusing the common Assamese people of xenophobia and therefore repeatedly targeting “one particular religious community” (Muslims) in the name of protecting their identity. No wonder this particular incident at Gorukhuti caught the headlines in international news networks like Al Jazeera and Pakistan’s Dawn, at a time when our Prime Minister was on the United States tour.

The incident at Gorukhuti on September 23, 2021, again drew our attention to the issue of land, which is the primary target of illegal encroachers of dubious nationality. It was a long-pending demand of various organisations in Assam, including the All Assam Students’ Union (AASU), to clear the large-scale encroachments in Kuruwa, Fuhuratoli and Dholpur areas under the Sipajhar revenue circle in Darrang district. Around 77,820 bighas of Government land in these areas had been under the occupation of illegal migrants for a long time.

There is an ancient Shiva Mandir in the nearby Dholpur hill and the land belonging to it has also been encroached upon by the infiltrators. It is now under tight security arrangements due to the frequent eviction drives in this area that poses an existential threat to this Mandir. As per historians, Ahom kings looked after the Mandir for a long time. Later, other Nepali kings and a few kings of the Koch-Rajbongshi kingdom too were devotees of this Mandir.

It all began during the late 1970s when many Bengali-speaking Muslim families had migrated from Nagaon district and settled here through illegal encroachment. During the Assam Agitation in 1983, former PM Indira Gandhi visited this area and handed over tin sheets, blankets, food, and other relief material to people of various regions of Assam to settle at Dholpur. On February 15, 1983, several people lost their lives in protest against the occupation of lands by illegal intruders in and around the Dholpur and Rangamati areas. Years later, these very settlers encroached upon the lands of the native inhabitants and began occupying more and more farming land that was owned by the locals but who did not necessarily reside in the vicinity.

Earlier this year, Assam CM Dr Himanta Biswa Sarma had announced that Government lands all over the State would be freed from encroachment. Over 400 bighas or roughly 132 acres of encroached land have already been freed in Hojai, Karimganj, and Darrang districts. The land is indeed the most valuable and prized possession for the illegal infiltrators and many a time, it is also noticed that they are even ready to die than lose their land. The encroachers’ brutal attack on the State police forces using sharp weapons and sticks during the Dholpur evictions is a case in point. It eventually resulted in 11 policemen and a few locals, too, being  critically injured.

A report on ‘Illegal Migration into Assam’ was submitted to the President of India by the then Governor of Assam Lt. Gen (Retd.) SK Sinha in 1998 clearly showed that the Muslim population of Assam rose by 77.42 per cent in 1991 from what it was in 1971

Their modus operandi is to grab the land of the native residents of the area through means, fair or foul. In many instances, they also try to legally possess cultivable land. The process of completely evicting the illegal infiltrators from their lands is tenuous. These are mostly Government lands or lands that have been procured through land mafias who force the owners of these lands to sell them at throwaway prices. Perhaps the police believed that the migrants would be deterred by the show of force and were therefore unprepared for the kind of mob reprisal that took place that day.

But, several episodes in the socio-political history of Assam are proof enough of the fact that these encroachers are not the ones who would give up their landholdings so easily. The State Government has announced the Gorukhuti Multipurpose Agricultural Project worth Rs. 9.60 crore in the 77,000 bighas of Government land, huge parts of which had been occupied by illegal infiltrators. These lands are mostly located in the riverine areas, prone to flooding and erosion. The people of Gorukhuti, comprising primarily of Assamese and Nepali Hindus, are mainly associated with dairy and agricultural farming related activities. The idea is to set up collective farms of local Assamese youth in the migrant-occupied Government lands.

The State Government has announced the Gorukhuti Multipurpose Agricultural Project worth Rs. 9.60 crore in the 77,000 bighas of Government land, huge parts of  which had been occupied by  illegal infiltrators

If the endeavour is successful, this is going to usher in a new era of cultural change in the overall societal landscape of the Assamese society. But, certain shocking revelations later came to light, pointing fingers at the Popular Front of India (PFI) role behind instigating the illegal encroachers to fire at the police. CM Himanta Biswa Sarma himself said that a PFI team had visited the area a day before the incident on the pretext of “distributing food items”. Earlier, the State Government had sent a dossier to the Centre seeking an immediate ban on the PFI after its activists were arrested during the CAA agitation.

Besides Darrang district, many suspected illegal Bangladeshis have settled in the areas surrounding Tezpur in Sonitpur district. Here also, they have occupied huge chunks of government lands at the Burhachapori Reserve Forest area. Among the nine LACs in the Sonitpur district, Sootea, Biswanath, Tezpur, and Barchala have been the most highly affected ones. After making these areas their safe haven, the illegal migrants carry out various unlawful activities such as car-lifting, burglary, theft and robbery, running of cow syndicates in close association with certain local influential forces, etc.

A report on ‘Illegal Migration into Assam’ was submitted to the President of India by the then Governor of Assam Lt. Gen (Retd.) SK Sinha in 1998 clearly showed that the Muslim population of Assam rose by 77.42 per cent in 1991 from what it was in 1971. Comparatively, in the same period, the Hindu population had risen by a mere 41.89 per cent. The vast change that has taken place in the demography of Assam and discussions around it might as well sound rhetorical. But, can rhetoric take away the merit of well-documented facts already in the public domain? While Muslims constituted 30.9 per cent of the population of Assam in the year 2001, this share jumped to 34.2 per cent in 2011. In 2001, only six districts had a Muslim majority. Whereas, in 2011, they constituted the majority in nine districts.

The issue of illegal infiltration from Bangladesh is not merely a religious one but a serious economic, political, and cultural problem. The demographic change is alarming, especially in those districts of Lower Assam that share a contiguous boundary with neighbouring Bangladesh. E.g. till almost the turn of the last century, Dhubri was a Hindu-majority area. It was once a part of the Koch-Rajbongshi kingdom of present-day Cooch-Behar in West Bengal. Dhubri also boasted of prosperous Rajbongshi zamindaris such as Golakganj and Gauripur. But, at present, the Rajbongshis account for a mere 11 per cent of the electorate of Dhubri district. As per the 2011 Census, Muslims constitute almost 80 per cent of the population in the District. 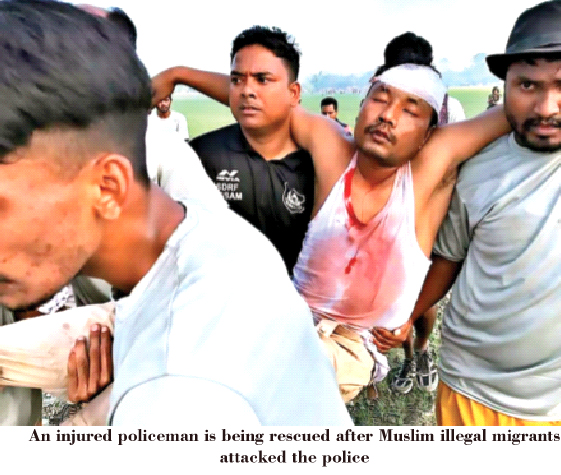 The demographic transition of the Lumding region in the undivided Nagaon district is equally shocking. In the Census of 1901, 31 per cent of the district’s population consisted of people belonging to the Dimasa and other communities. Today, Census data barely finds any count of them in the district. Many of the smaller groups were either wiped away or moved out to other districts due to the increasing pressure on their land and resources by the incoming immigrant population. The name ‘Lumding’ itself traces its roots to the Dimasa language. Once the traditional homeland of the Dimasas, Lumding today is chiefly dominated by a non-indigenous population of migrants. Sadly, not a single Dimasa person has represented the constituency till date.

The issue of illegal infiltration from Bangladesh is not merely a religious one but a serious economic, political, and cultural problem. The demographic change is alarming, especially in those districts of Lower Assam that share a contiguous boundary with Bangladesh

A newspaper report published way back on September 17, 2010, in The Deccan Herald, reported that more than 7,000 bighas of land belonging to 39 Sattras of Assam in Dhubri, Barpeta, Nagaon, and Morigaon are in the grip of illegal encroachers. As per the Brahma Committee Report, this number is far higher. It had clearly mentioned that the identity of as many as 18 Sattras in Assam is under threat, following large-scale encroachment by illegal Bangladeshi migrants.

This again draws our attention to the fact that the problem of illegal encroachment of Government lands by infiltrators in Assam is real. Politically motivated narratives such as religious intolerance, discrimination against Muslims, violation of human rights, etc. have been deliberately woven to camouflage the real problem that cannot be understood simply as a Hindu-Muslim concern. It has more to do with the land rights of the natives and the constant threat posed to their lives and livelihoods by the migrants.