Having had a detailed look at the handling of fireworks in India in parts 1 to 4, let us now take a look at how other nations handle fireworks and get a fresh perspective of our own actions.

If there is so much hungama with respect to fireworks in India, then surely there might be similar brouhaha in other nations too – or so, I assumed. Reality, it turns out – is quite different. Far from banning fireworks, nations seem to be celebrating and making special exemptions for fireworks.

Take the case of England, for instance. Instead of banning fireworks, England gives special exemptions for various festivals, including Diwali, to enable people to burst fireworks! See this screenshot from website of Metropolitan Police of London. 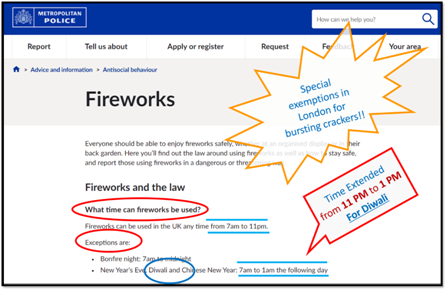 Does it not seem ironical that a country like England, which has no specific cultural or civilisational affinity with Diwali, makes special exemptions for bursting crackers on Diwali and a country like India, which has     deep associations with Diwali, goes all out to completely stop the use of fireworks on Diwali? Do note that England is not the exception in the world but the rule. Sadly, India with its propensity for ban – turns out to be the exception.

Fireworks, in some form or the other, in public display or in private use, are a part & parcel of celebrations across the globe. While they are surely regulated to varying degrees, more for safety considerations than for environmental considerations, there is hardly a nation that has completely banned fireworks.

The US condemns attacks on Hindus in Bangladesh, says Freedom of Religion is a Human Right