Diwali, Crackers and Pollution – Truth uncovered! Part 3 – Analysis of judgments in the case

There are 4 judgments that have been passed in the Supreme Court in this case WP (civil) 728/2015 and related matters. The last judgment, which is in force now, was passed on 23.10.2018. To understand this 2018 judgment, it is important to first understand the previous three judgments and especially the interesting turn that the case took, after the second judgment was passed, in September 2017.

As an immediate response to the extreme levels of pollution seen in Delhi in 2016, the Court, on 11.11.2016, suspended licenses of all shops selling fireworks in NCR (National Capital Region). Thus, fireworks could no longer be sold in NCR.

Then, around 10 months after this, on 12th September 2017, after hearing detailed arguments of both sides, the Court passed a judgment with two critical observations:

Thus saying, the Hon’ble Supreme Court, lifted the order of suspension on sale of fireworks that was imposed in November 2016.  (See screenshots of the extracts from the judgment) 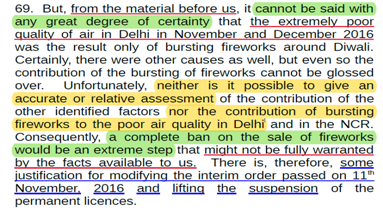 After this judgment, the events took a very interesting turn.

If any judgment goes against us, we ordinary mortals, generally, accept the same as fate and move on or, at best, appeal against the judgment. But the set of petitioners in this case, obviously, are no ordinary mortals. The power and influence wielded by them can be gauged from the fact that when the judgment of the bench was not to their liking, they presented a flimsy document and got the bench that was hearing the case itself changed!

This is not an allegation being levelled by the author but the recorded finding of the Hon’ble Supreme Court itself. See extract from the judgment delivered in Oct 2017:

Even more interesting than the constitution of the new bench, at the behest of petitioners, was the change in views of the new bench. While the earlier bench had said that there was no clear proof of crackers causing pollution in Delhi, the new bench took the view that:

Hence, the new bench in October 2017, less than a month after September 2017 judgment, and just a week before Diwali, rolled back the earlier orders which allowed people to sell fireworks in NCR. The way in which the bench did this was also unique.

It (bench) said that it was not sitting in “review of the September judgment” and was not overturning the judgment. But it (the court) was just changing the date from which the September judgment would become effective – which is from 01.11.2017 - around 12 days after Diwali  (celebrated on 19.10.2017). Thus, it reimposed the ban on sales of fireworks in NCR before Diwali – a step which the earlier bench had called “too radical and unwarranted,”- and lifted the ban again, just after Diwali!

Thus, was achieved a review of a judgment without a formal review and a ban imposed, without actually imposing a ban! The justification given by the bench was that the suspension of fireworks was a step to “...test..and find out if there would be positive effect of this suspension on pollution, during the Diwali period.” (Para 14 of October 2017 judgment).

The fireworks were, therefore, banned in NCR - this time, not to stop Pollution but to “test and see” if it stopped pollution!

Weird though it may seem, the case then hinged on the results of this experiment or “test” conducted on Diwali. The results were soon submitted in form of two reports. The content of these reports and the Court’s interpretations of them, are given hereunder:

The report stated that while, NO2 and SO2 levels remained within limits, the PM 2.5 and PM 10 levels showed an increase of up to 2 to 3 times at some places. This, though, dissipated within 2-3 days – leaving no scope for any long term impact.

While what is said in this report is important, what is not said or missed is even more important. Note that:

Hence, the claim that crackers caused the pollution in Delhi during Diwali, would not stand the test of science.

This committee stated that “..adverse impact of firecracker bursting..was not significant statistically.”

As stated in Point # 4 in Part 2, what the committee means by the above is that they could not find any adverse impact of bursting crackers on the health of citizens in Delhi! With this definitive a conclusion by the Supreme Court appointed Committee, the case against the fireworks should have ended then and there – after all, “grave harm” and “irreversible damage” to health of citizens were touted as the main reasons for filing the case.

From the above extract, it looks like the Court was, rather surprisingly - not apprised of the true meaning of the statistical concept of “Statistical significance.” And was therefore, misled into deriving a meaning which is the exact opposite of what was said in the report! (Refer to Point #4 in Part #2 for a better understanding).

The above misinterpretation notwithstanding, the Hon’ble Court was led into committing another grave error – that of relying on anecdotal and unverifiable claims made by individual petitioners instead of relying on the scientific, evidence based and verifiable reports submitted by NGT, IIT and the Supreme Court appointed committee itself! See extract of the judgment

Thus, to summarise the above rulings for a better understanding:

You may now draw your own conclusions from the above.

Coming up Next – Analysis of the “Precautionary Principle -” another justification given for the ban on crackers.

Guwahati: Northeast is going to be developed as Bharat’s bio-economic hub as the eastern Himalayan region is rich in mega-biodiversity and it is among  34 biodiversity hotspots around the world.  Visiting the institute of bioresources & sustainable development at Imphal, Union science & technology minister  Dr Jitendra Singh also commented that there is a need to put these invaluable genetic resources to use for the economic growth of the region. Union minister Dr ...