Whether the crackers cause pollution or not, and if they do, then what is the extent of it – is the crux of the case against crackers and the most contentious issue in public debates.

We shall take a two-pronged approach to this. First, we shall give details of the data presented before the Hon’ble Supreme Court. Then we shall present an analysis of five years data for Delhi which is publicly available through CPCB (Central Pollution Control Board) portal- and trust the readers to draw their own conclusions.

The following data sources have been relied upon by the Supreme Court to reach its conclusions:

Summarised below are the major findings of the above.

Bursting of Fireworks does not find a mention as a cause for pollution, even in this report!

Besides the above, there are several other critical aspects of this study that need to be highlighted. These are:

Findings of this committeeare summarised in this extract of para 21 from the 2018 judgment:

By saying that the relationship between pollution on Diwali and impact on health was “not significant statistically,” the committee was basically saying that there was no causal relationship between the two or in simpler terms that Pollution did not have any adverse impact the health of people during Diwali.(“Statistical significance” is a technical term/concept in statistics, used to differentiate a mere correlation from a causal relationship).

You would note that

Having read through each of the above reports and submissions, the author felt a need to further check the levels of pollution all through the year and not just around Diwali.Data of past five years from 2015 to 2020 (publicly available on CPCB website) was thus analysed.The findings are surprising, if not shocking!

There emerged two critical points that did not find much consideration in the court proceedings. 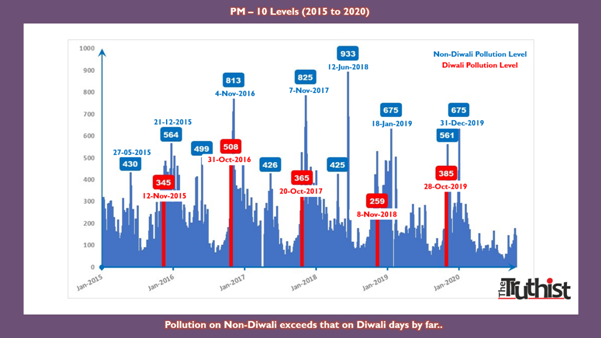 The other aspect missed is that:

With the above discussion arises a more important question which all of us need to ask:

Why are all those, with an avowed agenda of fighting for the “right to clean air,” almost singularly, if not obsessively, focussed on just 10 out of the 1255 polluted days that we’ve had in the past five years? That too when many of 1245 days,which they do not even seek to address, have pollution levels much higher than the 10 days which they, at least, make a pretence of addressing.

Coming up next – Analysis of the Supreme court judgment.

Kejriwal bans storage, sale, bursting of all kinds of firecrackers during Diwali

One of the Vice Presidents of the National Bank of Pakistan (NBP) has been arrested by the Federal Investigation Agency (FIA) after the government authority conducted a raid at the head office of the bank.     The raid was conducted on Saturday night while three bank officials, including a woman, fled before the raid, Samaa TV reported. The FIA is trying to prevent the smuggling of dollars and many people across the country have been arrested on charges of illegal currency transac ...