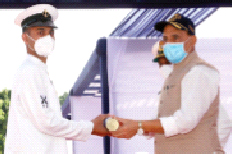 Raksha Mantri Shri Rajnath Singh conferred gallantry and meritorious service medals on the Indian Coast Guard (ICG) personnel at an investiture ceremony held in New Delhi on October 9, 2021. Speaking on the occasion, he extended his best wishes to the winners and exuded confidence that these awards and medals would not only boost the morale of the awardees, but inspire other ICG personnel to give their best to safeguard the interests of the nation. Raksha Mantri also addressed the 38th Coast Guard Commanders’ Conference.

The marathon was organised as a part of the Swarnim Vijay Varsh celebrations, marking the 50th anniversary of the 1971 Indo-Pak war, which led to the liberation of Bangladesh. Poonch: Indian Army on Sunday (October 17) organised a marathon in the Poonch district of Jammu and Kashmir to commemorate the 'Swarnim Vijay Varsh' of the 1971 Indo-Pak war and 'Azadi ka Amrit Mahotsav'. Speaking to ANI, Sabina Parveen, a participant in the marathon, said that she is very thankf ...