Rains have continued to batter Uttarakhand and Kerala over the last few days. In Kerala, at least 42 people have died so far, while Uttarakhand has recorded the death of at least 52 people. While 12 NDRF teams are providing round the clock support in the two States, the Government has pressed into service the Indian Army, IAF and the Indian Navy. 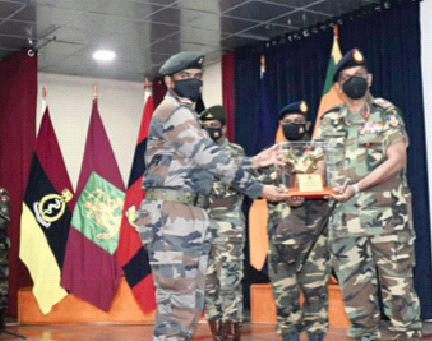 The 8th edition of joint military exercise between the Indian Army and the Sri Lankan Army titled  Mitra Shakti culminated on October 16, 2021. The culmination phase of the exercise was jointly witnessed by the visiting Chief of the Indian Army, General MM Naravane and General Shavendra Silva, Chief of Defence Staff and Commander of the Sri Lankan Army on October 15, 2021.

The second edition of Naval Commanders’ Conference of 2021 commenced on October 18, 2021 at New Delhi. The conference will review major operational, materiel, logistics, HRD, training and administrative activities. Raksha Mantri Shri Rajnath Singh addressed the Naval Commanders during the inaugural session and interacted with them on matters pertaining to the national security.

In his address, the Minister said that this conference provided an important opportunity to share views on key issues facing the country and the Navy. He added that as a responsible maritime stakeholder India supports consensus-based principles and a peaceful, open, rule based and stable world order and envision IOR with the universal values of rule-based freedom of navigation and free trade in which the interests of all participating countries are protected. Being an important country in this maritime route the role of our Navy becomes more important in ensuring the security of this region. Raksha Mantri expressed happiness at the Navy effectively carrying out these responsibilities.

The marathon was organised as a part of the Swarnim Vijay Varsh celebrations, marking the 50th anniversary of the 1971 Indo-Pak war, which led to the liberation of Bangladesh. Poonch: Indian Army on Sunday (October 17) organised a marathon in the Poonch district of Jammu and Kashmir to commemorate the 'Swarnim Vijay Varsh' of the 1971 Indo-Pak war and 'Azadi ka Amrit Mahotsav'. Speaking to ANI, Sabina Parveen, a participant in the marathon, said that she is very thankf ...