To monetise Government’s assets or not to is the question that kicked up a big furore in political, business circles and frenzied the markets in equal measure.

After Narendra Modi took reins in 2014, the Prime Minister himself was not an aggressive votary of disinvestment in state-run enterprises during the first term. But then, delivering on big signature projects and meeting the electorate’s aspirations do need billions of dollars in resources.

Well, whether one likes it or not, PM Modi has embarked on a mega national monetisation pipeline that will fetch him a whopping $81 billion to create new rural infrastructure and spruce up the expanding sub-urban satellite townships to expand the country’s growth story to grassroots.

In effect several assets with or without definitive revenue streams will be handed over to private companies over next four years through lease contracts to mobilise huge capital resources for fresh infrastructure development in the ‘New India’.

Interestingly, the new monetisation drive coincides with the Central Government launching 75 years of Independence with pomp and show. Monetisation is not privatisation per se but roping in private companies to fully exploit the assets that are under-utilised seems to be the motto.

Rahul Gandhi seems to have conveniently forgotten or was unaware that several infrastructure assets were outrightly sold, leased or monetised during UPA’s 10 years lacklustre, corrupt regime. A case in point is the Mumbai-Pune corridor or for that matter tenders to bring in a private company involving Rahul’s brother in law, Robert Vadra in New Delhi Railway Station was also done during the Congress regime

Even the excess large land bank with Government, semi-Government agencies, autonomous bodies and State-run enterprises may be pooled to carve out a special purpose vehicle for monetising these assets and maximising their value for capital expenditure by the Government as indicated in the Union Budget for this fiscal.

In a rush to attack the Modi Government, Rahul Gandhi seems to have conveniently forgotten or was unaware that several infrastructure assets were outrightly sold, leased or monetised during UPA’s 10 years lacklustre, corrupt regime. A case in point is the Mumbai-Pune corridor or for that matter tenders to bring in a private company involving Rahul’s brother in law, Robert Vadra in New Delhi Railway Station was also done during the Congress regime.

Political slugfest notwithstanding, implications of the decision on monetisation are far-reaching for the country that seeks to extend its growth story to the last man standing in true spirit of antyodaya.

Firstly, leasing out or handing over productive and revenue earning public assets to private companies or businesses may not be a crime. But, that should be the last option for Finance Ministers like Nirmala Sitharaman that take pride in not borrowing  even a single rupee extra  to get over the two-year long Covid-19 pandemic induced difficult economic situation. 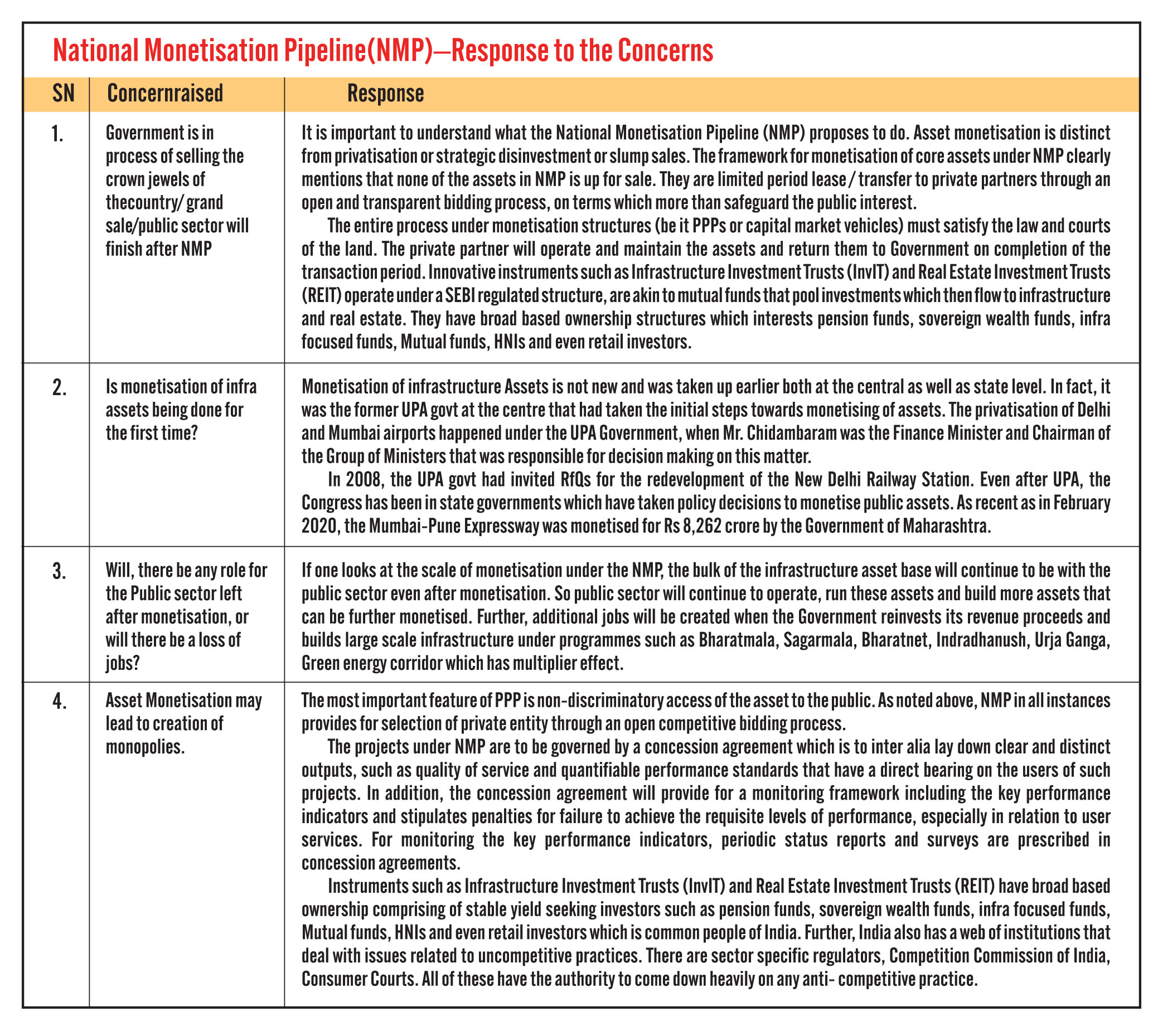 Instead, partnerships with private sector should be harnessed to building new assets and infrastructure through effective and simple policy regime. De-bureaucratising and removing the red tape in the private partnership deals should be the thrust of any economic reform programme. Even if ownership of these assets technically were with the Government, selling this Rs 6 lakh crore monetisation deal to electorate, especially in the ensuing Punjab and Uttar Pradesh state Assembly elections may not be easy.

Secondly, deploying private capital into new infrastructure projects worth Rs 100 lakh crore spread over 25-years would be hassle free rather than involving them in both productive and non-productive existing assets. While managing Government finances with tight revenue flows is a wee-bit difficult, asset sale or lease deals at this point of time would send out a wrong signal on the country’s economic standing.

Finance Minister’s predicament is understandable given that the disinvestment drive was not moving fast enough to bolster her non-tax revenues mobilisation. Instead, Modi Government should allow the fiscal deficit to widen yet another financial year as the economic activity is firmly on pick up mode.

Thirdly, evolving a national consensus on assets lease of this magnitude may be a prerequisite to kick off the process. Diverse stakeholders like the labour force, banks and financial institutions, policy makers, socio-economic organisations and political parties may have to be roped in an open flexible debate. Already, Bharatiya Mazdoor Sangh has expressed serious reservations on the assets lease. Swadeshi Jagaran Manch may not be very comfortable about Government losing effective control over these assets. 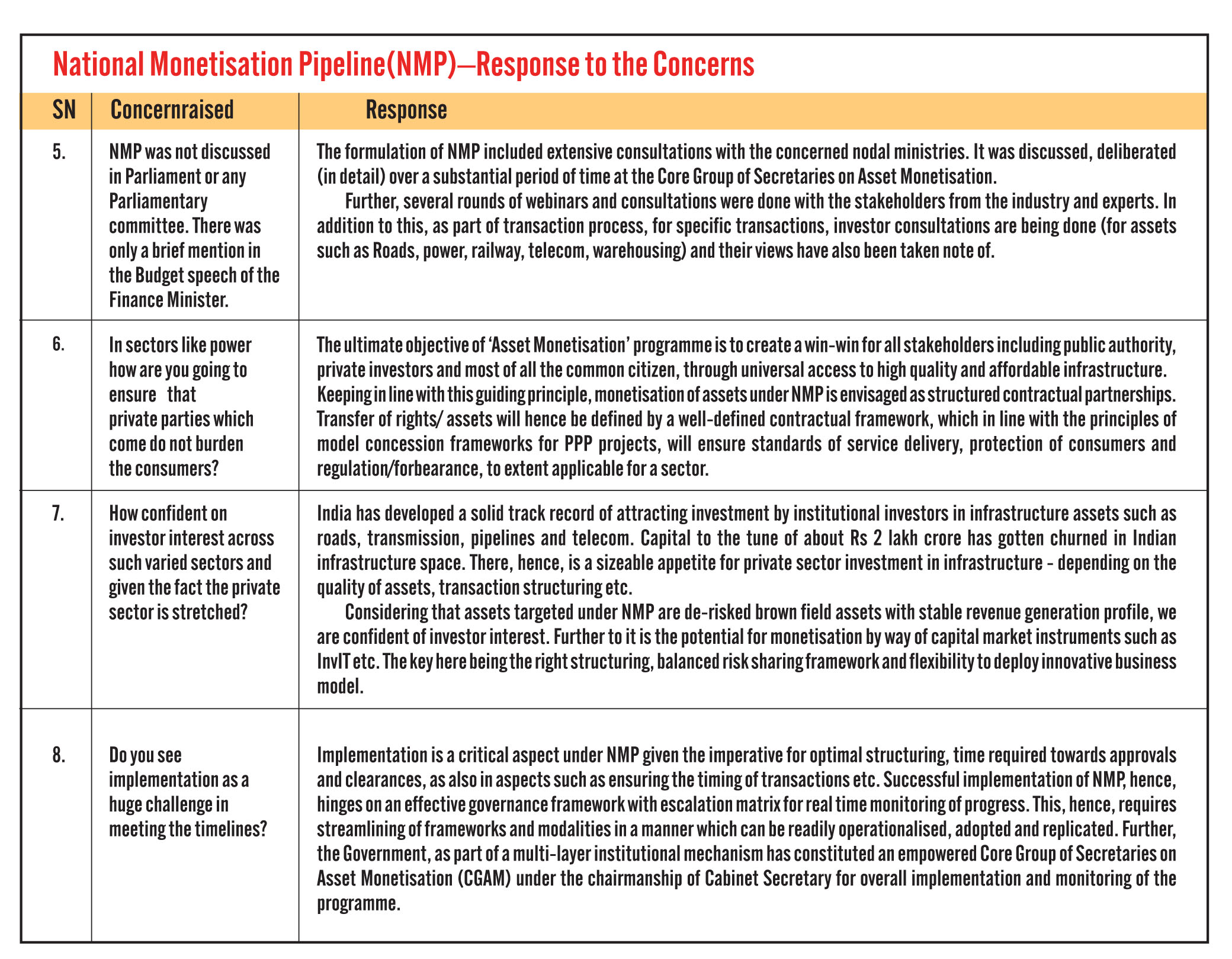 Fourthly, if public assets were to be finally handed over to private companies either through lease or outright sale, then the end-use of funds from these deals may have to be defined in clear terms.  Will the funds mobilised through monetisation, Rs 88,000 crore in this financial year, be re-deployed to create new capital assets without diversion into non-productive revenue expenses or bridging fiscal deficit to spruce up public finance balance sheets?

For instance, will personnel employed with organisations holding these assets be ring-fenced from possibly losing their earnings or ouster from employment? How different would the new assets created be from monetisation of existing properties either in ownership, management, profitability or sustainability?

Fifthly, one cannot expect a businessman or  private enterprise to do charity by taking charge of Government assets? While businesses were bound to make profits, key question would be the right valuation for monetisation of assets like railway lines, train services, roads network, airports, ports or even stadiums that host international sports extravaganzas. Profit is something a business has to earn. But, perhaps Government may have to dish out norms against profiteering by private companies from monetised public assets built on taxpayers’ money.

Getting the policy mix right is key to success of economic reforms. And, the Modi Government has a big daunting task to deliver.