The Archaeological Survey of India (ASI) has withdrawn the permission given to the Institute for the Advancement of Transdisciplinary to conduct excavations at Pattanam and Mathilakam in Kerala. ASI found that the institute was using the logo and name of ASI without prior permission. They also found that they were charging interns, which was against the norms laid out by ASI.

The organiser weekly was the first to bring out irregularities in the said excavation project. 'PAMA is headed by a team that has nothing to do with archaeology in qualification or experience. Its chairperson RVG Menon retired as an academic in engineering. Its director P J Cherian did his PhD in 1993 from the University of Calicut on “The Communist Movement in Travancore: From the Origins to the Uprisings of 1946”. He did his M Phil (1985) and MA (1978) in history and has no academic qualification in archaeology,' the report said. 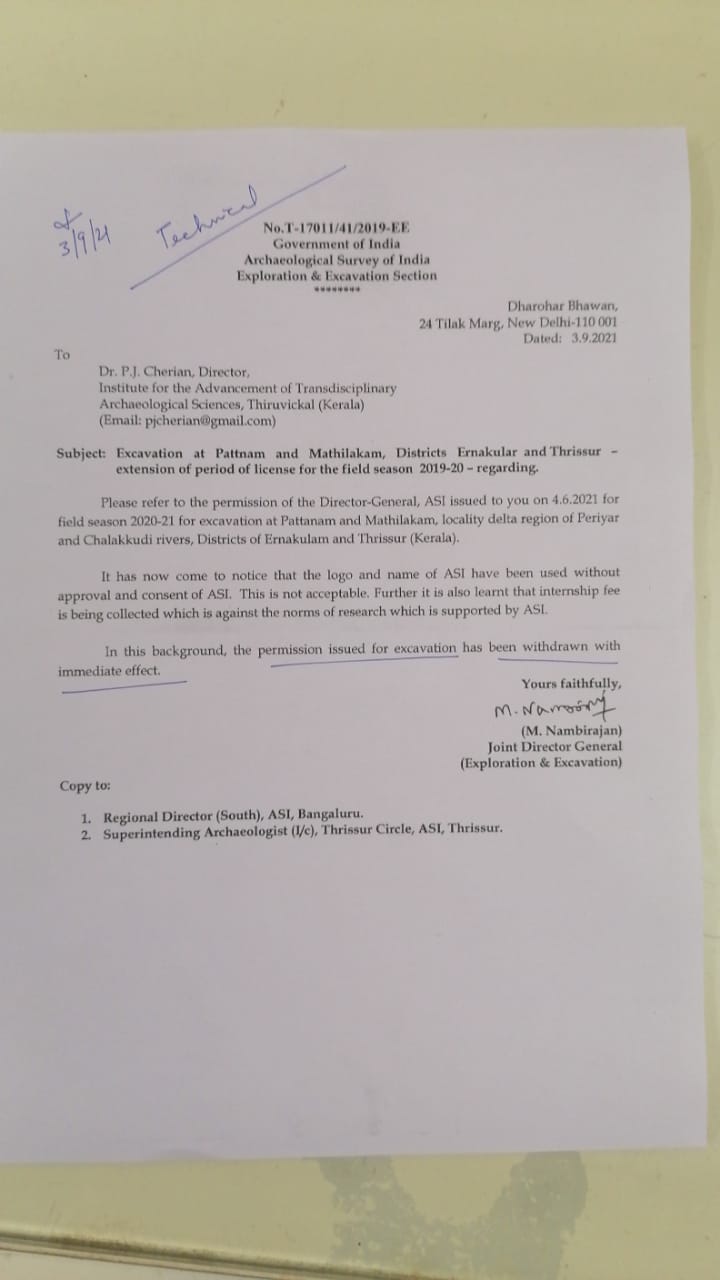 It was also found that permission for the excavation was granted without any consultations and from the very beginning, various allegations were raised but were ignored by the concerned authorities. Even the Cultural ministry was kept in dark and was not provided with any information about the excavations.

The permission for conducting excavations for the session 2020-2021 was given on June 6, 2021. In the letter sent to Dr P J Cheriyan, director of the Institute for the Advancement of Transdisciplinary, ASI has also pointed out that any such violation of guidelines was not acceptable.

Dogdhar PJ Cherian is a pawn of western missionary cult to control endian polity. hindus r slaves, still look to west to get controlled. dhimmi modi and shah would stab hindus at the fall of hat. dhimmi modi is mahatma2 gazi. only YOGI is the hope.

Also read: ISKCON devotees protest in several parts of India against violence on Hindus in Bangl ..

The ritual, Sudhi Wadani, will take place on October 26 in Bali. The day will also mark her 70th birthday   Sukmawati Sukarnoputri, daughter of founding president of Indonesia, Sukarno, will convert to Hinduism on October 26 in Bali.   Currently, she practices Islam.   The ritual ‘Sudhi Wadani’ will be conducted at the Bali Agung Singaraja at the Buleleng Regency in Singaraja city of Bali.   Sukmawati was married to Kanjeng Gusti Pangeran Adipati Arya ...