“There has been a concerted effort to defame Savarkar after Independence”

Describing Veer Savarkar as a true nationalist and visionary, RSS Sarsanghchalak Dr Mohan Bhagwat said that whatever he said has come true; today, it is not wrong to call it Savarkar's era because it's an era of nationalists.

“Due to lack of awareness about Savarkar, there has been a concerted campaign to defame him after Independence and the next target could be Swami Vivekananda, Swami Dayanand Saraswati and Maharishi Aurobindo. Right now, Sangh and Savarkar are being targeted,” said RSS Sarsanghchalak Dr Mohan Bhagwat at the launch of Veer Savarkar: The man who could have prevented Partition, authored by veteran journalist Uday Mahurkar and Chirarayu Pandit on October 12.

Dr Bhagwat said Mahatma Gandhi and Veer Savarkar had differences in their opinions, but Savarkar was always concerned about Gandhiji’s health. “Those who don't understand this are still running the campaign to malign Savarkar. Gandhi and Savarkar were totally opposite in their approaches but both shared one quality – they were committed to Bharat.”

While praising Narendra Modi-led BJP Government at the Centre, RSS Sarsanghchalak said it was only after 2014 that India’s security policy started getting priority in the Government’s agenda.

Seeking to clear confusion about ‘Hindutva’, Dr Bhagwat said, “Savarkar did not use the term ‘Hindutva’ for any religion, but it represented the cultural and civilisational identity of Bharat. Even today, there is a lack of awareness about Veer Savarkar and people harbour misconceptions about him. Savarkar’s Hindutva, Vivekananda’s Hindutva... it has become a fashion to say so. Hindutva is one i.e., Sanatan, which is eternal.”

RSS Sarsanghchalak said that Savarkar was misunderstood because he spoke sternly but argued that the country would not have faced partition had all of India spoken like him. Veer Savarkar always emphasised the need for a strong military. 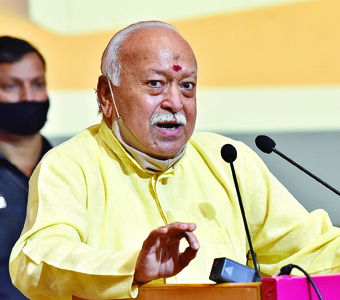 “Savarkar’s Hindutva, Vivekananda’s Hindutva... it has become a fashion to say so. Hindutva is one i.e Sanatan, which is eternal.”-RSS Sarsanghchalak Dr Mohan Bhagwat

Talking about Akhand Bharat, Dr Bhagwat said Akhand Bharat is the need of the world. “It is our responsibility to keep our motherland united. Yogi Aurobindo had said that eventually, Akhand Bharat will come into being. Ram Manohar Lohia, too, had dreamt of Akhand Bharat.”

He also agreed that roads should not be named after cruel Mughal emperors like Aurangzeb and praised the Jammu & Kashmir Governments for naming schools in the name of martyrs.

Describing Savarkar as a true nationalist, Defence Minister Rajnath Singh said people of a particular ideology have been spreading falsehoods about Savarkar who was a great hero of the Indian freedom struggle.

Commenting on the lie spread about Savarkar that he had apologised to the British, Defence Minister said, “A lot of falsehoods were spread against Savarkar. It was repeatedly claimed that he filed multiple mercy petitions before the British Government. The truth is he did not file these petitions for his release. A petition was filed as a legal right at the behest of Mahatma Gandhi so that he could come out of jail and join the freedom movement. It was on Gandhi’s suggestion that he filed the mercy petition.”

Shri Singh also said, “Terming Veer Savarkar as a Nazi or Fascist was also not right. The truth is he believed in Hindutva. He was a realist. He believed in Hindus and Muslims in India shared common culture and this was important for unity.”

“The Opposition parties hated Savarkar to such an extent that in February 2003 they boycotted an event in which the then President Dr APJ Abdul Kalam had unveiled a portrait of Veer Savarkar. Only former Prime Minister Chandra Shekhar had participated. The Opposition parties did not even respect the office of the President," the Defence Minister said.

“A plaque in memory of Veer Savarkar installed by former Prime Minister Atal Bihari Vajpayee in 2004 at Cellular Jail at Andaman Nicobar was also removed after the UPA Government assumed the office, he added. 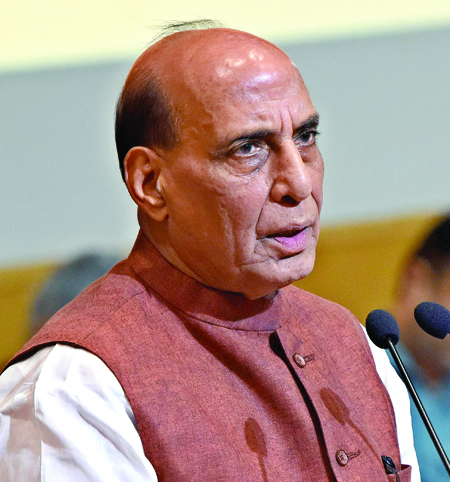 “A lot of falsehoods were spread against Savarkar. It was repeatedly caimed that he filed multiple mercy petitions before the British Government. The truth is he did not file these petitions for his release. The petition was filed as a legal right at the behest of Mahatma Gandhi so that he could come out of jail and join the freedom movement.” -Rajnath Singh

Rajnath Singh said that Veer Savarkar was not a person but an idea and his followers were increasing by the day.

At the event, the author Uday Mahurkar said that the Partition of India happened because of the politics of appeasement of the Congress, despite repeated warnings by freedom fighter Veer Savarkar.

“Muhammad Iqbal was the propounder of the two-nation theory. In 1930 at the Allahabad Session, he issued a statement saying that Sindh, Balochistan, Punjab, and North-West Frontier Province must form the future Islamic country. After the Sindh province was separated in 1936, Savarkar understood that the nation was heading towards partition. He constantly warned Congress that if it does not quit appeasement politics, the country and its Hindu population would have to bear the brunt. The party however refused to listen,” Uday Mahurkar said.

Uday Mahurkar also said that after Savarkar's release from the prison, he was invited to join the Congress by SM Joshi and Achyut Patwardhan. But he declined the offer saying that the Congress has gone so far in appeasing Muslims and Christians, that he cannot support the party.

The book, Veer Savarkar-The man who could have prevented Partition, exposes defaming charges against Veer Savarkar and reveals the motives behind them. Uday Mahurkar, in his book, has called Savarkar as the ‘father of India's national security’.

All the National Hero should be honoured by nation.we have no right to see any lapsed or loophole if happened in the life of great man considering their sacrifice and dedications.

Kabul: One of the greatest threats of the Taliban's coming back to power was that the group would bring in a radical form of Islamic teachings in Afghanistan and the intuitions seem to be getting true in the country.  With the recent developments in Afghanistan, it is not a surprise that the Taliban formed 'government' is trying to kill the present system of fair and formal education for Afghan people, Author Valerio Fabbri wrote in an article in Geo-Political. Case ...