“67 Hindu voters of a particular booth of North 24 Pargana's Minakhan Assembly Constituency had fled from their place immediately after poll results came out on May 2. Makhan is located near the Basirhat border. As they wanted to return to their own place, Sadhan Baj was asked to send his wife Pinky Baj to some ‘Mudassar’ for some days as barter value. The State is in panic & living a prolonged nightmare. ”

West Bengal's post-poll violence appears distinctly communal in nature. Ground facts about lives, properties, agricultural land, open grounds being illegally captured, the dignity of women being rampaged by goons belonging predominantly to a particular community are blood-curdling. While Dhimmi Hindus are being used as frontline oppressors in some places to oppress those Hindus who voted against TMC, the heads controlling them belong to a specific community. For example, Sukanta Pramanik of Falta had been picked up by the local police & tortured by Policemen named Abhijit Hait, Rafikuzzaman Sk & Sanjay Bogie. Though frontline oppressors included Hindus like Abhijit Hait & Sanjay Bogie, the real control stayed with Jahangir. Abhijit Hait, Rafikuzzaman Sk & Sanjay Bogie suggested Sukanta's wife Manju Pramanik to 'settle the score with Jahangir’ to get Sukanta released from the Police Station. Jahangir-phenomenon is ravaging the whole of Bengal, especially the border-nearing ones.

67 Hindu voters of a particular booth of North 24 Pargana's Minakhan Assembly Constituency had fled from their place immediately after poll results came out on May 2. Makhan is located near the Basirhat border. As they wanted to return to their own place, Sadhan Baj was asked to send his wife Pinky Baj to some ‘Mudassar’ for some days as barter value. The State is in panic & living a prolonged nightmare.

Demography of Bengal’s near border assemblies changed steadily due to ceaseless infiltration cornering original Hindu inhabitants of the places. A section of original Hindu inhabitants as a result, got involved in appeasing infiltrator-patron lobbies to avoid day-to-day toxic conflicts and also to earn illegitimate bucks. Infiltration-industry turned into a huge source of corruption benefitting not only Muslims but also sections of Hindus who turned Dhimmis. A vicious cycle had thus formed which continually threatened existence of SC-STs of near border assemblies. Hindus are losing ground due to orchestrated, well-planned, TMC-backed infiltration in which Dhimmi Hindus too associated themselves with pro-infiltrators either out of fear or out of greed. A large section of threatened Hindus, this year, grossly demonstrated electoral rejection of TMC. Anticipating such rejection, Muslims of Bengal regimented behind TMC turning West Bengal Election 2021 into a war.

Given below please find important takeaways from analysis of Election Data procedural details whereof had been provided in an earlier piece.

Finding 1:— Considering 75% average overall voter turnout, it becomes apparent that 45% of casted votes came from Hindus, 29% from Muslims & 1% from other communities. 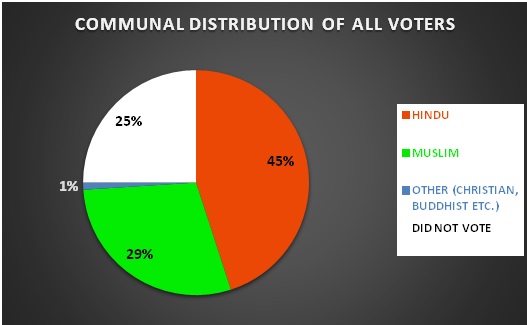 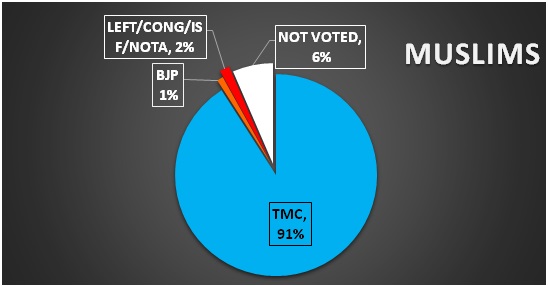 Finding 3:— Out of 100% casted Muslim votes, (i.e. considering all casted Muslim votes as 100% Muslim Vote, which, as stated earlier, is about 29% of total number of electorates), 97.1% went to TMC, 1% to BJP & 1.9% to Lefts, Congress, ISF, NOTA & Independent combined. This implies near-complete consolidation of Muslims behind TMC. However, those facing post-poll wrath of ruling party are Hindus. Who are the perpetrators? Muslims in reality, though frontline oppressors include Dhimmi Hindus in some places. Doesn’t data corroborate with communal nature of West Bengal’s post poll violence? Data would indicate it clearer when booth wise mayhem corroborated with ECI’s booth wise data & voters’ list of corresponding booths in different districts of West Bengal would be elucidated later in separate pieces.

Finding 4:— While 83.8% of Hindus who casted their votes, voted against TMC indicating huge anti-incumbency against the ruling party, (refer to a separate piece for substantiation of this claim), 97.1% Muslims voted for TMC. While anti-incumbency existed amongst Hindus, it didn’t exist amongst Muslims. Does this mean ruling legislation of TMC worked only for Muslims & not for Hindus? Does election data analysis reveal TMC’s Muslim-appeasement? Why did 42% Hindus of Bengal opt to vote out TMC? What was the root cause of their refusal? As Hindus & Muslims of West Bengal grossly differed in their electoral choice, it indicates clouds of crisis hovering over the horizon of West Bengal’s democracy. TMC legislation appeared to have kept one community happy & other grossly unhappy violating many fundamental principles of the Constitution of India. Can Union of India remain silent spectator in such a situation? Or need to act upon prescriptions of the Constitution to tackle such crises on time?

Finding 5:— Muslim voters aggrieved of TMC too didn’t vote much for BJP. 65.52% of those Muslims who voted against TMC, voted for Left, Congress, ISF, NOTA and Independent combined while 34.48% of anti-TMC Muslims voted for BJP. This shows Muslims not only consolidated for TMC, they grossly rejected BJP alongside. Otherwise, why even anti-incumbency Muslims predominantly rejected BJP?

Is such rejection based on lack of Governmental co-operation? Answer is in the negative. No report of BJP-run Governments’ negative bias against Muslims to allot Governmental schemes to them have ever featured in public domain. While eligible Muslims have not been selectively deprived from doles & schemes announced by any Government run by BJP anywhere in India, Muslims’ blunt refusal to BJP in West Bengal must be having some cause beyond Governance. However, why should anything else other than Governance influence electoral outcome of any place, is a legitimate question. Moreover, why should Muslims indulge in grabbing Hindus’ solid & liquid properties, lives & women after a mere election, is the question that’s haunting not only Bengal but India.

Did they perceive election to be a war & hence, indulge in post-war plunder in medieval manner? West Bengal is a State, 31% populace of which formed a warlike regiment thinking election to be a war. Should such a State which doesn’t perceive democracy in right spirit have the privilege to participate in any further election in short future? Union of India may please ponder over such pertinent, theoretical arguments as such arguments form the very basis of democracy.

TMC’s win is based on Muslim votes & the masterminds of Hinducidal mayhem in Birbhum, South 24 Parganas, North 24 Parganas, Coochbihar, Pashchim Medinipur, Purba Medinipur & elsewhere are predominantly Muslims barring one or two exceptions. As Muslims voted TMC to power, have they demanded leverage to vandalize Hindus’ lives & properties in return? Is that the silent deal between TMC & perpetrators of Hinducidal Bengal violence? Such hypotheses also corroborate with ground fact that Police & Administration are not only inactive against the perpetrators, but also backing them with necessary information.

Also read: Afghanistan must not become a hub of radicals, every Indian feels' pains', says Modi ..