Puranic and contemporary evidence of Onam or Vamana Jayanthi shows how rooted is the festival in Hindu religious texts and Puranas. This evidence flies in the face of Marxist-Evangelist-Atheist groups who are out to malign and destroy Sanatana Dharma. All their attempts fall flat yet year after year, yet they unabashedly continue their Hinduphobic tirade. 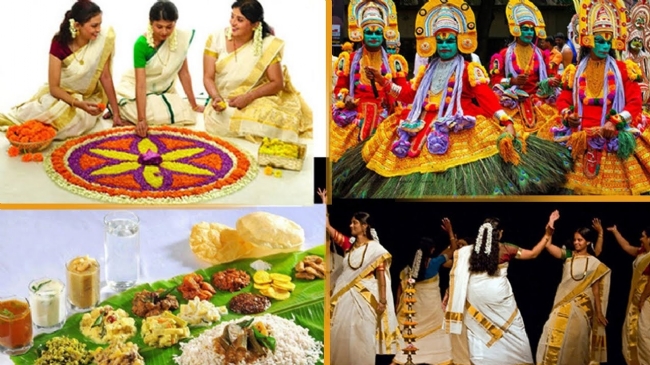 An annual trend that has picked up in recent years and gathering momentum is cutting off the Hindu ithihaasa- Purana origins of Hindu festivals, spinning a web of lies and half-truths, then converting these Hindu festivals into secular ones festivals. One such casualty is the Onam festival, where the attempt portrays the festival as a war between Brahmin led Aryans and Dalit led Dravidians. The hijacking of Onam and converting it into a Hindu bashing event is evident from the following tweet by the Finance Minister of Kerala, Sri Thomas Issac.

“Happy Onam! We celebrate Mahabali who did not discriminate by caste or creed, not Vamana who cheated him. This edition of harvest festival has something to celebrate. Kerala has announced floor prices for 14 types of vegetables in its drive for self-sufficiency in vegetables.”

Another tweet by a Kerala Christian lady – @alindaMjan, goes as follows:

“Onam is not a Hindu festival. Onam does not glorify a Hindu god. Onam is celebrated in memory of the Asura Dravidian king, the one who was banished by Vamana out of jealousy. Apparently, they couldn't accept the fact that a Dravidian Asura was a better king than the Aryan Devas!"

The secular version of the Onam festival is that it is not a Hindu festival, nor does it have anything to do with any Hindu gods. It marks the return of an Asura King, Maveli, who was banished by a Hindu God who was jealous of the Asuran king!

Few churches in Kerala have gone one step ahead. As part of their “inculturation” strategy, they digested the Onam festival, stripped it of its Hindu roots, and celebrated the same in Churches. Needless to say, Bible verses are quoted while doing so. In 1604, Church authorities in Kerala banned Christians from attending or celebrating Hindu festivals like Onam. Yet to pursue their own selfish agenda of proselytization, Church and Christians violate their own rules. Screenshots of historical and contemporary texts give ample evidence of this ban. 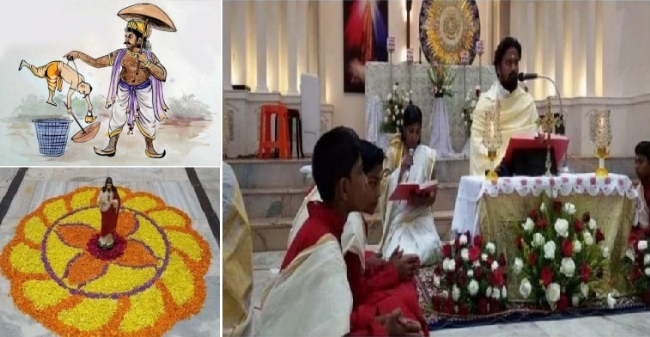 History of Kerala Vol 1 by K.P. Padmanabha Menon and Synod of Damper: significance and contributions in the history of Christianity in India by Arum Thomas Abraham, Priest, and Mar Thomas Syrian Church of Malabar show how Christians were prohibited from attending Onam. 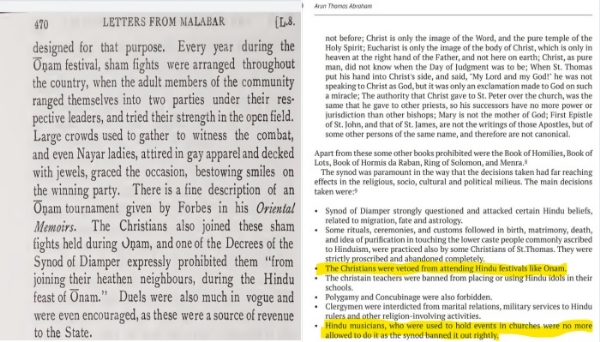 Thus it is very clear that a calculated attempt is being made by non-Hindus, especially Christians, atheists and Communists, to use the Onam festival to bash Hindus, to bring forth the “evil Aryan vs. innocent Dravidian” narrative. The fact that the Christian church had forbidden the celebration of Onam by Christians is brushed under the carpet by these Christians. To create caste divisions and animosity amongst Hindus, a celebration of Onam as a purely Hindu festival as per age-old traditions based on Puranas is given a twisted interpretation “an insistence to celebrate the defeat of the struggles of the untouchables and the lower-castes of our country “- (James Michael on Round Table India). Brahmin bashing caricatures are drawn and shared on social media platforms and used Hindu bashing articles published on various websites.

Let us look at the puranic and ancient literary references to the Onam festival as also contemporary books, travelogues of Europeans visiting or staying in India. A study of all these materials reveals that Onam is not a festival limited to Kerala alone but to the neighbouring state of Tamil Nadu, and very interestingly, it is also celebrated in Ambala-Patiala-Nahan areas of north India as “Baman (Bhadrapada) Dwadashi” or “Vamana Jayanthi” or “Trivikrama Jayanthi “ in other parts of India.

From ancient days, Onam was celebrated in Tamilakam (Tamilnadu-Kerala) not as a festival of Bali but as the birthday of "Asura destroying" Lord Vishnu. This is mentioned in ancient Sangam literature in a poem called Maturaikkāñci.

Bhagavata Purana (8.18.5) says Lord Vishnu took birth as Vamana on Shravana Dvadashi. This is exactly the time of Uthradom (Onam Eve). The Onam festival is celebrated for four days until Purnima. Even South Indian tradition agrees that Onam marks the birth of Lord Vishnu as Vamana. Onam is a celebration of the birth and victory of Lord Vishnu as Vamana and the return of his devotee king Mahabali to earth. Mahabali comes back every year from sutala to see his land & celebrate Lord Vamana's birth at Vamana temple in Thrikkakara (="place of holy foot") in Kochi. This tradition of celebrating Onam as the birthday of Vishnu continued to be celebrated in the middle ages. 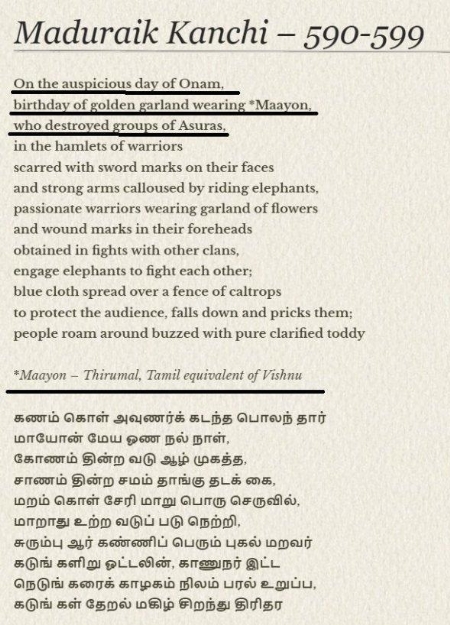 Medieval literature like the 10th century Divya Prabandham shows Onam continued to be celebrated as the festival of Lord Vishnu. Rice and fruits were prepared and offered to Vishnu. 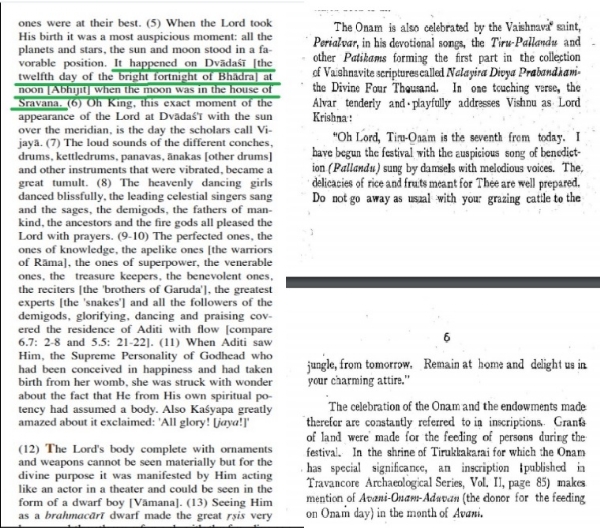 to be celebrated as the festival of Lord Vishnu

That Onam was a festival of Lord Vishnu confirmed by Independent sources. William Logan, a Scottish civil servant of the 19th century, noted in his "Malabar Manual" that Onam was the day Vishnu descended to make his people happy. Along with Vishnu came Vishnu's devotee Bali.

Francis Day was a 17th century East India Company administrator who lived in Kerala and Tamilnadu. He wrote a book about Kerala based on his ethnographic study. In his book, he reproduced the stories of Onam he heard from local people. It is very clear that the descent of king Mahabali to earth is to see his people live happily and not to act as a revengeful Aryan god out to destroy a Dravidian asura as made out by anti-Hindu forces. 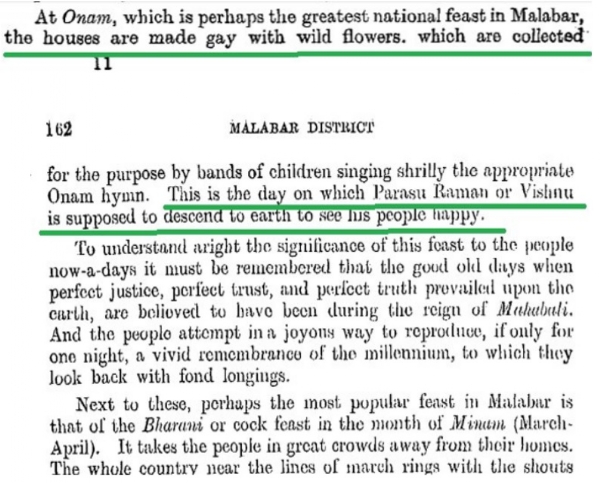 Francis Day was a 17th century East India Company administrator who lived in Kerala and Tamil Nadu. He wrote a book about Kerala based on his ethnographic study. In his book, he reproduced the stories of Onam he heard from local people. Francis Day also writes in his book that Keralites of his day believed Onam marked the day when Lord Vishnu wandered about the earth. Along with Vishnu came his devotee Mahabali. 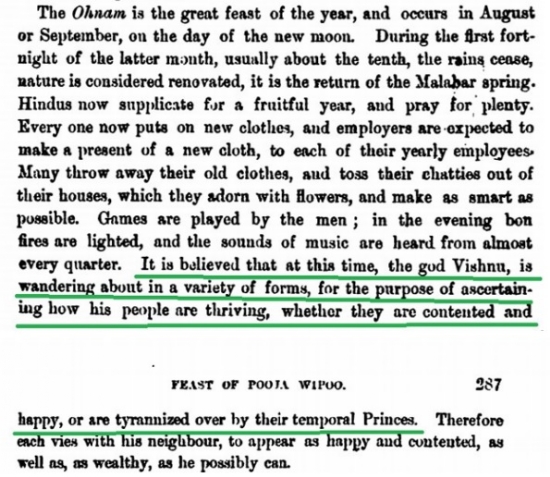 Even today, the most important part of Onam celebrations is Thrikkakara Appan, a clay Pyramid representing Lord Vamana, who is worshipped as the guest. This only shows how communists and evangelists have systematically divorced Onam from its Hindu roots. Vishnu comes to test Bali's generosity. He becomes satisfied & grants Bali any boon he wishes. But Bali has only one wish. To always be with Vishnu. Vishnu grants the wish. He leaves Vaikunta and repairs to Bali's new abode Sutala where there is no fear, hatred, disease.

Srimad Bhagavatam (5.24) says Lord Vamana served as the gatekeeper of Bali in Sutala, which is grander than Svarga. Vamana kicked Ravana out of Sutala when Ravana invaded Sutala. Such is the beautiful relation between Bhagavan and Bhakta. Hateful Marxists are not sparing even that.

Onam or Vamana Jayanthi is not a festival limited to Kerala alone. It is celebrated across the country. In some parts, it is confined to Vishnu temples celebrating it, while in other parts, it is celebrated by the general public in different forms. For all that nonsense about 'Aryan' Vamana and 'Dravidian' Mahabali. Here is a pre-modern painting from Mankot (c.1700). The dark-skinned dwarf is a beautiful Vamana. The Brahmin with a tuft (Choti) in the painting is none other than Mahabali. Mahabali was a descendant of Rishi Kashyapa and a Brahmin. Without knowledge of this basic fact, atheists, Marxists and other Brahmin bashing groups portray him as a victim of Brahmin arrogance. The other Brahmin is Shukracharya, who was the guru of Raja Bali and is standing behind. The missing eye of Shukracharya in the painting has scriptural evidence. As Raja Bali washes the feet of Vamana, Shukracharya takes the form of a sookshma jeevi and attempts to stop the flow of water. Vamana thrusts his finger, and it hits Shukracharya’s eye.

Hindus of the Patiala-Ambala-Nahan region celebrate a traditional festival named "Bawan Dwadashi" (Vamana Jayanti). The festival is dedicated to the worship of Bhagavan Vamana, who appeared on this day & performed Uddhara of King Bali (grandson of Sri Vishnu devotee Prahlad). This festival is recorded in documents pertaining to British rule. The Travellers Companion published in 1907 mentions this festival, terming it as the largest and most important fair of (Ambala) district. Processions of Thakur (Vishnu) are taken all around the city. The Tradition is still continued by Hindus of Patiala, Ambala, Jagadhari (Yamuna Nagar) and Nahan (Sirmaur) when deities from temples are taken out in a procession on "Bhadon Sudi Dwadashi" (Bhadon=Bhadrapada).

Devotees observe fast & undertake ritual baths on this day. Similarly, in Nahan, Sirmaur district of Himachal Pradesh, devotees take out Bawan Makars (Idols of Bhagavan Vamana) to commemorate the appearance of Bhagavan Vamana. Palnas ( Palanquins) are taken out from different Vishnu temples and finally brought to the Jagannath temple of the city. The unique thing in this festival is that Idols are stowed in a boat along with the palna & then floated in a tank/kund/Sarovar. Pujari rows the boat and performs parikrama of the temple. In the midnight after final worship, deities return to their respective abode. This is a unique festival of the undivided "Punjab Haryana Himachal" region.

Strong puranic and contemporary evidence of Onam or Vamana Jayanthi being rooted in Hindu religious texts and Puranas as presented above flies in the face of Marxist-Evangelist-Atheist groups who are out to malign and destroy Sanatana Dharma. All their attempts fall flat, yet year after year, they unabashedly continue their tirade against Sanatana Dharma.

(The author is an associate at the Centre for South Indian Studies, Hyderabad. The article is based on tweets of @TIInexile, @RajSharma1857 and @abhilegend000, whose contribution is gratefully acknowledged)

The mastermind of Mappila riots, Haji and Ali, raised Khilafat Army. The slogans or battle cry, were neither against ‘Imperial rule’ nor in favour of ‘Nationalism’ but against the ‘Kafirs’, specifically the Malabar Hindus   The bizarre yet shocking 1921 Malabar genocide and forcible conversion of Hindus followed by the infamous ‘Moplah riots’ or ‘Mappila riots’ marked one of the earliest radical Islamic violence against the H ...