It was Muslim League’s longtime dream to add Assam into the East Bengal map. Even Nehru was ready to sacrifice Assam. He was confronted by Gopinath Bordoloi, who demonstrated his nationalistic pride, wisdom and perseverance to ensure that Assam stayed with India

As India is celebrating the 75th year of Independence, the whole nation bows down remembering the sacrifices of our freedom fighters for the Independence of a United Bharat. Thousands laid down their lives in the path of freedom and thereby realising the dream of an Independent India for the future generation. India now pays tribute to those unsung heroes of our freedom struggle, whose love for the nation translated to our Independence after a long movement against the British rulers.

In the east of our country, Assam was also not behind other states of India in our freedom movement. Hundreds of freedom fighters of the state sacrificed their lives for the Independence of a united India under the leadership of the Congress party. But it was probably out of their imagination that the Congress leadership had some other plan in their mind about the fate of Assam. Congress leadership including Jawaharlal Nehru was in favour of Assam’s merger with Pakistan to appease the Muslim League.

Unlike others, freedom fighters and Congress leaders of Assam had to fight two battles during the freedom movement of India. One against the Britishes and another against their central leadership. It was said by none other than the freedom fighters themselves. Led by Bharat Ratna Gopinath Bordoloi, Congress leaders of Assam had to win a battle with their very own central leaderships, who were in favour of immolating Assam by including it with Pakistan. It was Bordoloi and a few of his close aide’s determination that compelled the Congress leadership to change their mind. If we dig into the political history of Assam, the facts show the step motherly attitude of Congress leadership towards Assam starting from the pre-Independence era.

It was Muslim League’s longtime dream to add Assam into the East Bengal map. The leaders of the Muslim League had a vision in their mind and they started working on it right from the early 1930’ of the 19th century to rapidly increase the Muslim population in the plains of the state. Huge influx started from Bengal to Assam starting from the 1930s and the plan was to increase the numbers of Muslims to lay a claim on Assam. Freedom fighter and Congressman of Assam Ambikagiri Raichoudhury frequently reminded Jawaharlal Nehru of immigration and settlers’ questions. Raichoudhury said out of fear that Assam could be the next Palestine if huge immigration from Bengal doesn’t stop. But this had little impact on Nehru, who wanted to gift Assam to Jinnah on a silver plate at the time of Partition.

Under the leadership of Syed Saadullah, the Muslim League was cooking the conspiracy to include Assam in East Bengal and Congress central leadership didn’t have a hesitation in it. But Gopinath Bordoloi and the Congress leaders of Assam were opposing it from the very beginning. After the fall of the Syed Saadullah government, Gopinath Bordoloi took charge as the Prime Minister of Assam in 1938. Bordoloi’s bold decisions were not well accepted by Congress leadership and he had to resign under tremendous pressure from the central leadership. 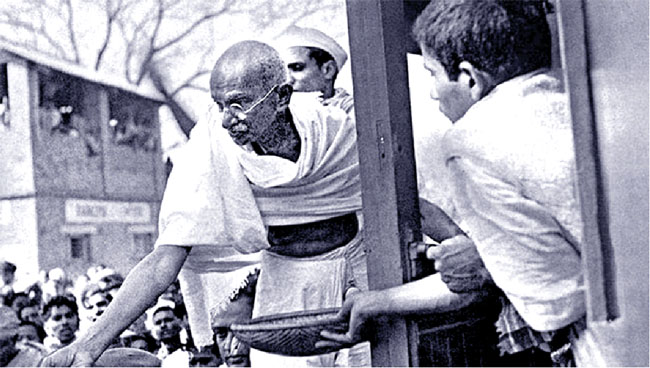 Gopinath Bordoloi’s fellow Congressman, Mahendra Mohan Choudhury wrote about the bold stand taken by Bordoloi against the wishes of the Congress leadership. Mahatma Gandhi was anxious about the huge influx from East Bengal to Assam under the patronage of British and Syed Saadullah government. Gopinath Bordoloi had sent Mahendra Mohan Choudhury to discuss the matter with Mahatma Gandhi. Choudhury wrote about the discussion with Gandhi, “We told Bapuji about the conspiracy to make Assam a Muslim majority state and include it in Pakistan under the patronage of Saadullah government. Gandhiji said, “Bordoloi also mentioned it in his report. The people of Assam shouldn’t accept this. If continuous immigration happens to a small state from its large neighboring states and if the indigenous people of the small states are on the verge to become minority, then they have the right of peaceful agitation (Satyagrah) against it.” Gandhiji further said, “Nobody can paint it in communal colour. The indigenous people have the right to take appropriate action against the migrated community.”

Mahendra Mohan Choudhury further wrote about the political foresight of Gopinath Bordoloi, “If Congress were not voted to power with absolute majority in 1946, no doubt Pakistan (Rahu) would have gulped Assam. This was possible only because of the political intelligence and popularity of Gopinath Bordoloi.” Choudhury wrote about the anti-Assam stand of the central leadership of the Congress party on the matter.

Cold War Between Nehru and Bordoloi

Bordoloi had to fight against the whole Congress Working Committee (CWC) on the matters of “Cabinet Mission” recommendation and “Grouping”. Freedom fighter Pushpalata Das wrote, “Bordoloi’s greatest political success was to get Gandhiji’s support during the critical time of “Grouping”. Gandhiji’s support to Assam divided the CWC and it was compelled to support the cause of Assam. The resolution passed in the Assam Assembly was a shield for Bordoloi and he played a perfect political game based on it. Pattabhi Sitaramayya once told me, the whole Congress Working Committee doesn’t match the weight of Gopinath Bordoloi.” Nehru wrote to President of Assam Congress Gopinath Bordoloi that it seems the Assam Assembly haphazardly passed the resolution, their concept about section and grouping is not clear.”

Answering this, Bordoloi boldly wrote to Nehruji that the resolution passed in Assam Assembly doesn’t have any confusion, rather the people of Assam were confused by his speech over radio. Annoyed by the stand of Bordoloi and his fellow Congressmen, Nehru once said that like the Muslim League, Assam by its adamant stand will be a disaster to the nation.

In the name of Independence, the central leadership of Congress wanted to immolate Assam and Gopinath Bordoloi had to fight against his own Congress leadership to save Assam from a possible merger with Pakistan. Fellow freedom fighter and Congressman Debeswar Sarmah wrote, “When the Cripps Mission proposed to include Assam in the same group with Bengal, all Congress leaders accepted it without any hesitation except Mahatma Gandhi. Gopinat Bordoloi met each and every central leaders of Congress party and tried to make them understand that Assam will lose its identity forever if it is grouped with Bengal. But he didn’t receive support from any leader. Only Shyama Prasad Mhukerjee and Sarat Chandra Bose supported the cause of Assam and said that Assam shouldn’t grouped with Bengal.”

Special Revision Petition under Article 136 of Constitution of India is being filed against the impugned judgment and final order of Madras High court in W P No. 13384/2021 in the NEET issue. The petitioner also sought ad-interim ex-parte stay on operation and further proceedings in connection with GO MS no.283 dated by which a “ high level committee has been set up by the TN government.  Tamil Nadu is only the state that has been opposing the NEET and falsely assuring th ...