Bell Bottom
Bell Bottom focuses on protagonist Akshay Kumar who as a RAW undercover agent is on a mission to save  victims of a hijacked plane. However, the absence of a solid script leaves cinemalovers with several unanswered questions and an abrupt climax

Akshay Kumar (Anshul) plays a Research and Analysis Wing (RAW) undercover agent who goes by the code name 'Bell Bottom'. After a plane is hijacked and lands in Amritsar, the seventh hijacking incident in five years, Akshay is called in to save the victims. The film focuses on his plans of a daring covert operation to rescue 210 hostages and neutralise four hijackers. This operation is connected to his personal tragedy, which makes it more impactful.

Set in the late 70s’ and early 80s’, we are introduced to Anshul’s perfect life. The second half takes a considerable amount of time to set up the plan. Bell Bottom and his team plan to permanently end the constant hijacking incidents. Coming to the execution part of the plan, the pace races towards the climax, where we get surprised by more than one twist.

The story doesn’t promise an all-new template but what it offers is a fast-paced, emotion-bound thriller. It has an uncompromising focus on developing the plan for a mission, with a step by step understanding of the process and leaves you on a high note with the implementation. Bell Bottom, who is seen playing husband to Vaani Kapoor, is a national-level chess player. He has a sharp memory and is fluent in Hindi, English, French and German. Vaani Kapoor as Anshul's wife is gorgeous on screen and even with a limited screen time, she supports her character well. 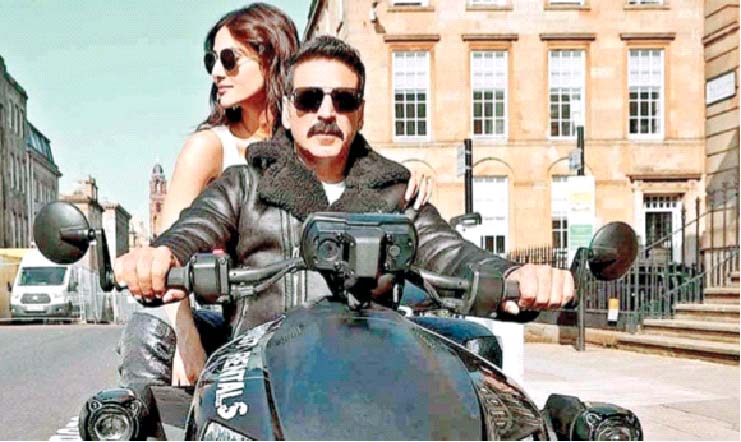 The film also stars Adil Hussain, Huma Qureshi and Lara Dutta in pivotal roles. Lara’s makeover as former Prime Minister Indira Gandhi is so effective that makes her hardly recognisable.  Huma Qureshi appears to help the Indian team out while they rescue Indian citizens stuck on the hijacked plane. Adil Hussain is overqualified for his character, and does not have much scope to perform. Dolly Ahluwalia’s connection with Akshay Kumar was well written, but a little more depth would’ve done wonders. Zain Khan Durrani as the deadliest terrorist does evoke hatred.

The story doesn’t promise an all-new template but what it offers is a fast-paced, emotion-bound thriller. It has an uncompromising focus on developing the plan for a mission, with a step by step understanding of the process and leaves you on a high note with the implementation

The hero, Akshay Kumar is in his full form as always and uses his star power to the fullest. But somewhere he lacks in comparison to his previous memorable performances of similar genre films like Special 26, Holiday, Airlift & Baby; or Gold, Rustom, Kesari and Mission Mangal, for that matter, in which he has gained an expertise till now. The reason possibly could be absence of a solid script.

The film is engaging and manages to hold your attention throughout. However, you will have to hold on to every minute of the action as there is a lot of back and forth in the storyline. The pace of the film remains steady and the narrative and characters don't lose momentum. Moving along with the story, the incidents that unfold don't really absorb you emotionally. Despite its genre, you don't get any goosebump moments. Also, the film leaves you with several unanswered questions, and an abrupt climax.

Adieu to Goddess Durga on 'Vijayadashmi', the day that marks the triumph of good over evil

New Delhi [India], October 15 (ANI): After celebrations for Navratri, it is time to bid adieu to Goddess Durga on the occasion of Vijay Dashami today, a day that marks the triumph of good over evil.   According to mythology on this day Goddess Durga annihilated the demon god Mahishasura after a fierce battle that lasted for nine days. This day also marks Durga Visarjan or immersion of Durga idols signifying the journey of the Goddess back to Mount Kailash after ten days of stay at ...