Between Devil and Deep Sea

The south Asian nation of Afghanistan has embraced mayhem after the abrupt exit of US and NATO troops from its land. The process of withdrawal of forces has resulted in a substantive increase in offensive procession by Taliban guerrillas determined to undone the gains of liberal values made in the last two decades. There is a pertinent security threat ballooning in the region as the militant group is turning more violent by seizing several provinces and bringing Afghan soldiers to their knees. The latter has suffered a shortage of sophisticated military equipment which has limited its war effort to counter the ever-strong terror outfit.

The effervescence of the extremist group is antithetical to the claims of the superpower which had allegedly invaded the land of mountains after the 9/11 attack to wipe out radical Islamist groups. It is, however, superfluous to detail the sponsor who sowed the breeding grounds for the emergence of the mujaheddin in the garb of the Soviet-Afghan war. The recent act of pulling out abnormally without smooth handover of power has also raised serious doubts on the credential and intentions of the United States. To throw the yolk of responsibility to the neighbours for establishing order after wreaking havoc over the years can have far-reaching implications. The imminent move might have caught spectators by surprise, though, the underlying factors which caused the most powerful nation to hasten the process to quit would unravel the realities of international politics. 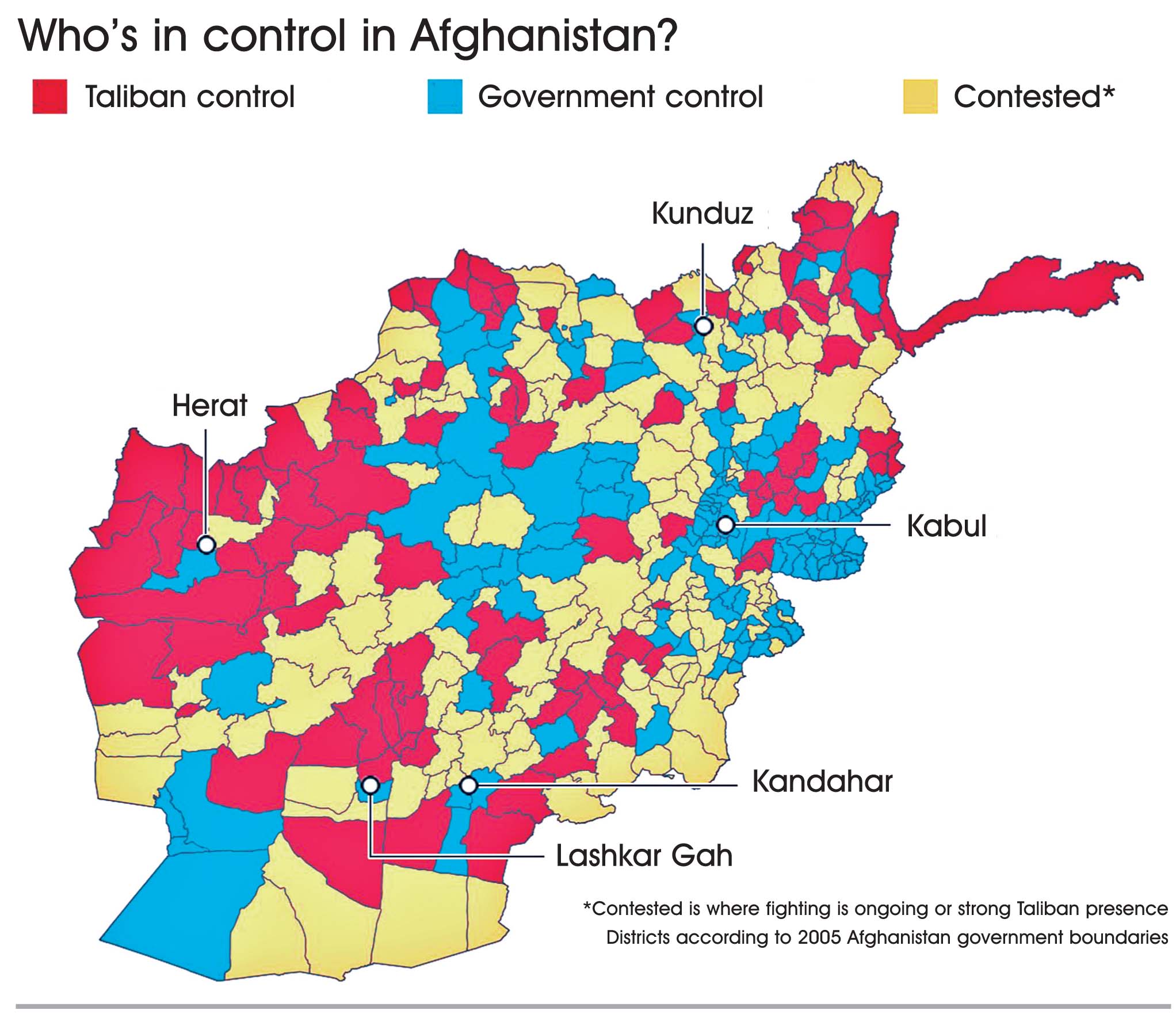 Moreover, India, which has invested billions of dollars in various projects of the country considering its geo-strategic importance has taken appropriate reactive measures and keeping the bull’s eye on the developments so that their interest wouldn’t be jeopardized. New Delhi would like to infuse vigour in their endeavour to bring normalcy after taking the chair of the United Nations Security Council (UNSC) for August. China and Pakistan, on the other hand, seem to be viewing instability as an opportunity, formally holding diplomatic talks with the delegation of Taliban which may be a worrying sign from the Indian perspective.

What the Taliban bring to the table...

Taliban is a militant group that seeks to re-establish Islamic emirate replacing civil government and run the country through enforcement of sharia and Islamic laws. The atrocities inflicted particularly on women and minority has been barbaric. Their proclamation for young girls above a certain age to join as brides of Taliban fighters reveals their tendency to treat members of the opposite gender as a mere commodity. Girls in those districts which had been under Taliban administration were forced to leave school after attainment of puberty. Women are barred to hold public offices and participate in social gatherings. Non- Believers and Infidels are either killed or forced to flee out and take refugees which would most likely result in ruckus among immediate neighbours. Freedom of expression is kept at abeyance and any voice of opposition meets suppression. Public beating, torture, and execution become normal courses of justice.

According to reports of human rights watch, the Taliban barely adhere to article 3 of the Geneva Convention of 1949 which provides immunity from war crimes and, thus, effectively violates other international humanitarian laws in the area of their control.

In addition, there is a glaring possibility of a greater number of Afghan youth being inducted in organised crimes including drug trade on large scale. A militia of brainwashed youth is to be inevitably manufactured using theological doctrines for Jihad (struggle) against any ideas which would be inimical to the beliefs of Islam. To put it pithily, the revitalisation of the Taliban would be a greater pushback and dent into the battle for tranquility in the times when Islamic terrorism has become a global menace and a force to reckon with. The rise of the Taliban will not only be tantamount to the defeat of the ideals of secularism but also a solicitation to desperado.

India needs to be cautious

The largest democracy in the world would be comparatively uncomfortable to foster ties with a government that doesn't draw its legitimacy from the people. Some unofficial sources, nevertheless, suggest that foreign minister S. Jaishankar had a secret plenary with Taliban leaders during his visit to Doha. Such state of affairs, if any, would be for the fact that New Delhi might be keen to keep every possible channel of communication wide open to remain the most relevant regional player and prevent subversion of its stake. India can play a pivotal role as a mediator to strike a political settlement between conflicting factions, though that is to be Afghan-led, Afghan-owned, and Afghan-controlled.

The situation, however, seems bleak because the Taliban has claimed to capture more than three-fourth of the territory beside key border crossings. Indian diplomats from the Kandahar consulate had to be evacuated amid a deteriorating security situation. A photojournalist was killed in Spin Boldak district while he was embedded with Afghan forces.

India’s presence in Afghanistan has largely been to accelerate people-centric- development and aid various infrastructure projects. The bilateral trade between both countries has reached over a one-billion-dollar mark despite Pakistan denying overland access on several occasions. India has been a crusader of democracy there and presented parliament to the Afghan people in 2015. Afghanistan has been crucial to India owing to its unique location. It is the gateway to landlocked countries of Central Asia that has huge trade potential. The development and operation of Chahabar port along with the Delaram-zaranj highway would end New Delhi’s dependence on Islamabad to connect with Kabul and further with Central Asian republics.

The continued growth of the Taliban may pose challenges to the internal security of India causing turbulence in parts of Jammu and Kashmir. The terror groups such as Lashkar-e-Tayyeba (LeT) and Jaish-e-Mohammad (JeM) which are lying low after the abrogation of special status may get emboldened and create unrest in the Valley

Afghanistan acts as a counterbalance to our arch-rivals China and Pakistan. India can take advantage of the fact that the Afghan border touches the region primarily dominated by Uighur Muslims and Pashtuns that had been hostile to their respective states in the past. Afghanistan is an essential component of the ambitious TAPI (Turkmenistan-Afghanistan-Pakistan-India) pipeline scheme that is decisive to address security needs for sustained economic growth.

The continued growth of the Taliban may pose challenges to the internal security of India causing turbulence in parts of Jammu and Kashmir. The terror groups, for instance, Lashkar-e-Tayyeba(LeT) and Jaish-e-Mohammad (JeM) that had been silenced after the abrogation of special status may get emboldened and create unrest in the valley. The smooth supply of illicit drugs may have adverse effects on the minds of youth in border states and led to anarchy serving the purpose of Pakistan.

The clashes between Taliban and Afghan soldiers are intensifying with the passage of day as neither side appear to surrender and end the bloodshed. Thousands of Afghans are leaving the country and moving towards Turkey to seek shelter due to the worsening situation in their homeland. The hospitals are overwhelmed with those injured and wounded.

Taliban is targeting major airports including Kabul to cut assistance of Afghan forces from the outside world. The scheduled visit of Afghanistan Army chief Mohammad Ahmadzai to meet top security officials in India including NSA Ajit Doval will crystallise New Delhi’s move. Intra-Afghan talks are the only solution to prolonged peace in the region. The “extended troika’’ meet to be called by Russia with the envoy from China, Pakistan, and the US in Qatar to stimulate inclusive civic settlement. India has been kept out of the talk which depicts divergences of opinion between Moscow and New Delhi. The Russian side is against the Ghani government and wants an interim setup.

The position of the United States has been sceptical in the whole process. They are playing infinite game (Game theory) in Afghanistan modifying rules so that conflict would never like to end tensions once for all to enhance their business as the largest arms exporter in the world and bolster their image as the savior of the world.

Whilst there is the least chance of emergence of any clear victors in the Afghan-Taliban war because major powers favor dispensation that would facilitate their interest and are not similar page, India should promote its imperishable commitment for concord that would invigorate longstanding civilizational ties with Afghanistan.

(The writer is a student of Hyderabad Central University)

Guwahati: Afghanistan’s former President Hamid Karzai expressed condolences over the death of prominent Afghan journalist Fahim Dashty, who fell prey to clashes that erupted between the Taliban fighters and the national resistance force in Panshir valley on 5 September and wished him paradise. “Late Fahim Dashty was a critic of my government and a loud voice for freedom of speech,” quoting Karzai, the country’s prominent newspaper Afghanistan Times reported. The former ...